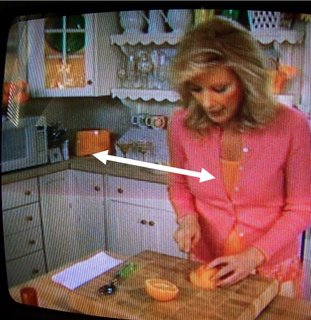 How does this show stay on the air?

I mean, really, look at this woman.

She dresses to match the kitchen. See the orange shirt is the exact orange shade of the toaster and the mixer? Pathetic! 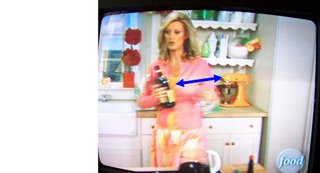 Every week the kitchen decor changes to match the week's theme. I mean everything changes - new dishes on the shelves, new mixer color, new toaster, etc. Every week, Sandy's clothes match the kitchen.

NOBODY cooks that way.

Is FoodTV going downhill fast or is it just me?

In the four short years since she came on the scene they have just about ruined her. I can just hear Gordon Elliot (her producer) behind the scenes:

"Come on Paula, baby, give 'em a little more Southern charm." Paula thickens her accent and throws in a few more, "from maa house to Yeers" & "y'all's".

"Take a huge bite of that muffin."

"Let the baa taa drip down your chin and coo like your in pure ecstasy."

It happened with Emeril, Rachael Ray, and now Paula.

Once FoodTV has an inkling that people like a host, they manipulate their good points and shove them down our throats until we can hardly stand the sight of them.

Did anyone see the recent "Paula's European Vacation"?

Michael supposedly gave Paula the trip to Paris for Christmas. If I were a gambling woman, I would wager a tidy sum that the whole Christmas gift scenario was orchestrated by Gordon Elliott and Food Network.

Now they have her two sons hosting a show. When will it end?

I liked it much better when she was a fresh humble personality that I looked forward to seeing once each week.

Next they will be messing with Alton Brown.

They are advertising his new show, "Feasting on Asphalt". I've never seen it, but I love the name.

I hope they don't ruin Alton,too.

Email ThisBlogThis!Share to TwitterShare to FacebookShare to Pinterest
Labels: Christmas