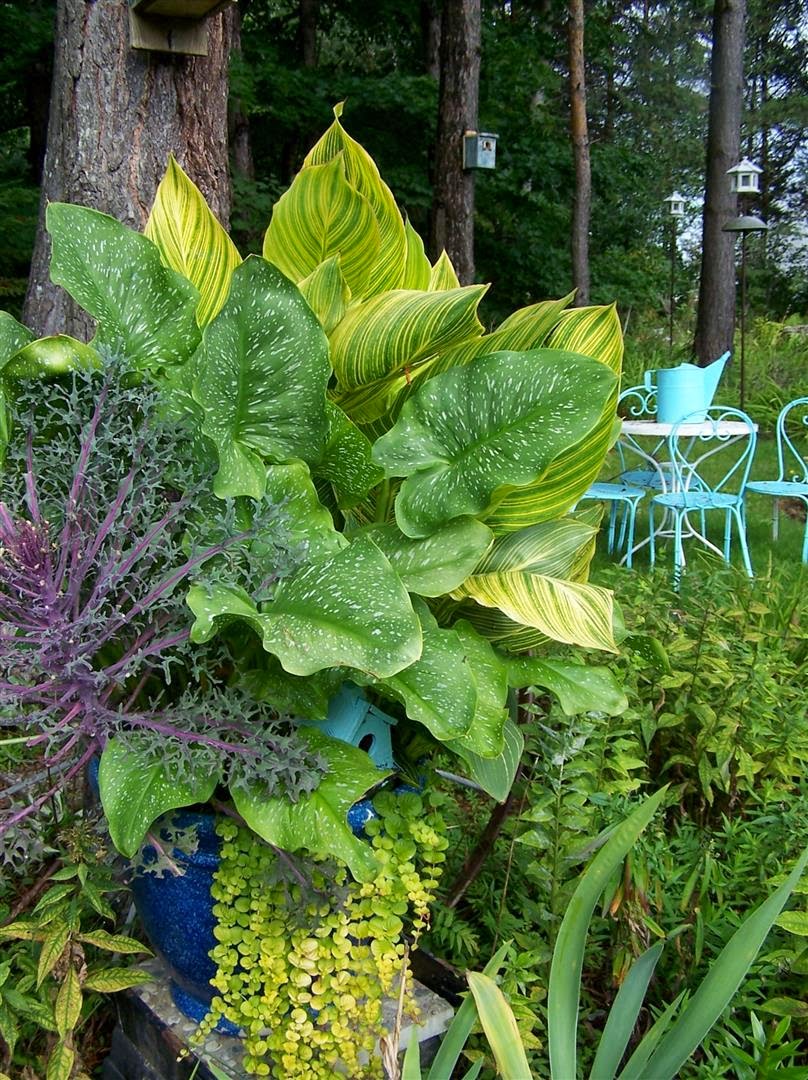 They may not bloom because they love heat and there has not been any heat this year.  Even if they don't bloom, I am happy with this container.  The foliage is huge & fabulous, so this guy has already performed beyond my expectations this year.  If you look in the center picture in my blog header, you can see this container in June before everything began to grow.  All that lushness just sits inside every winter waiting to explode--I know I keep saying this--but it's amazing!

Unfortunately the deer found the kale and at a big hunk of it. 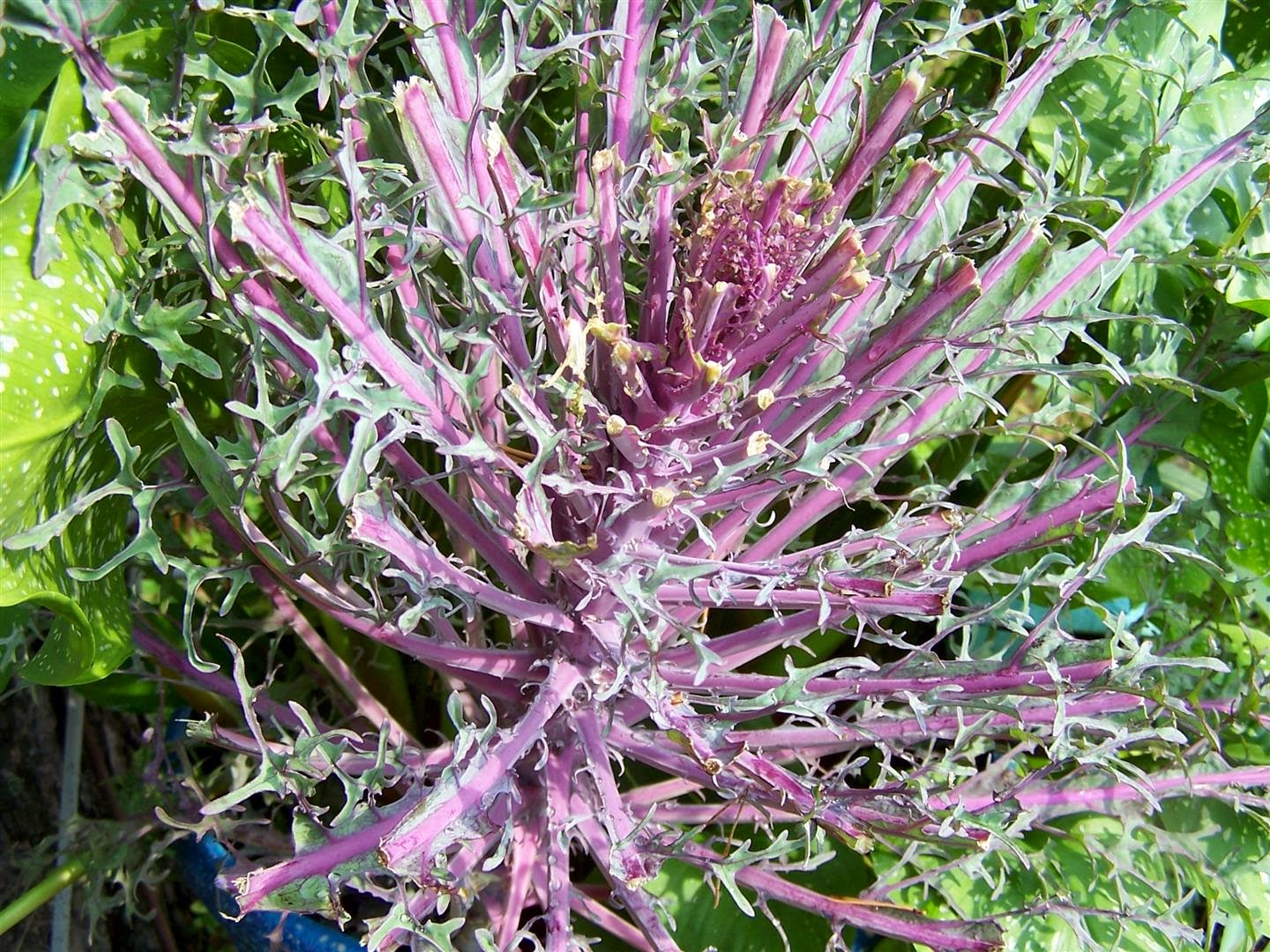 Hunting season starts Nov. 15.  Hoping we still have some hunters left in the neighborhood...if you have a garden, you probably feel the same.

I have had these pink starburst dahlias for probably 20 years.  They were the first dahlia I purchased and I still love them. 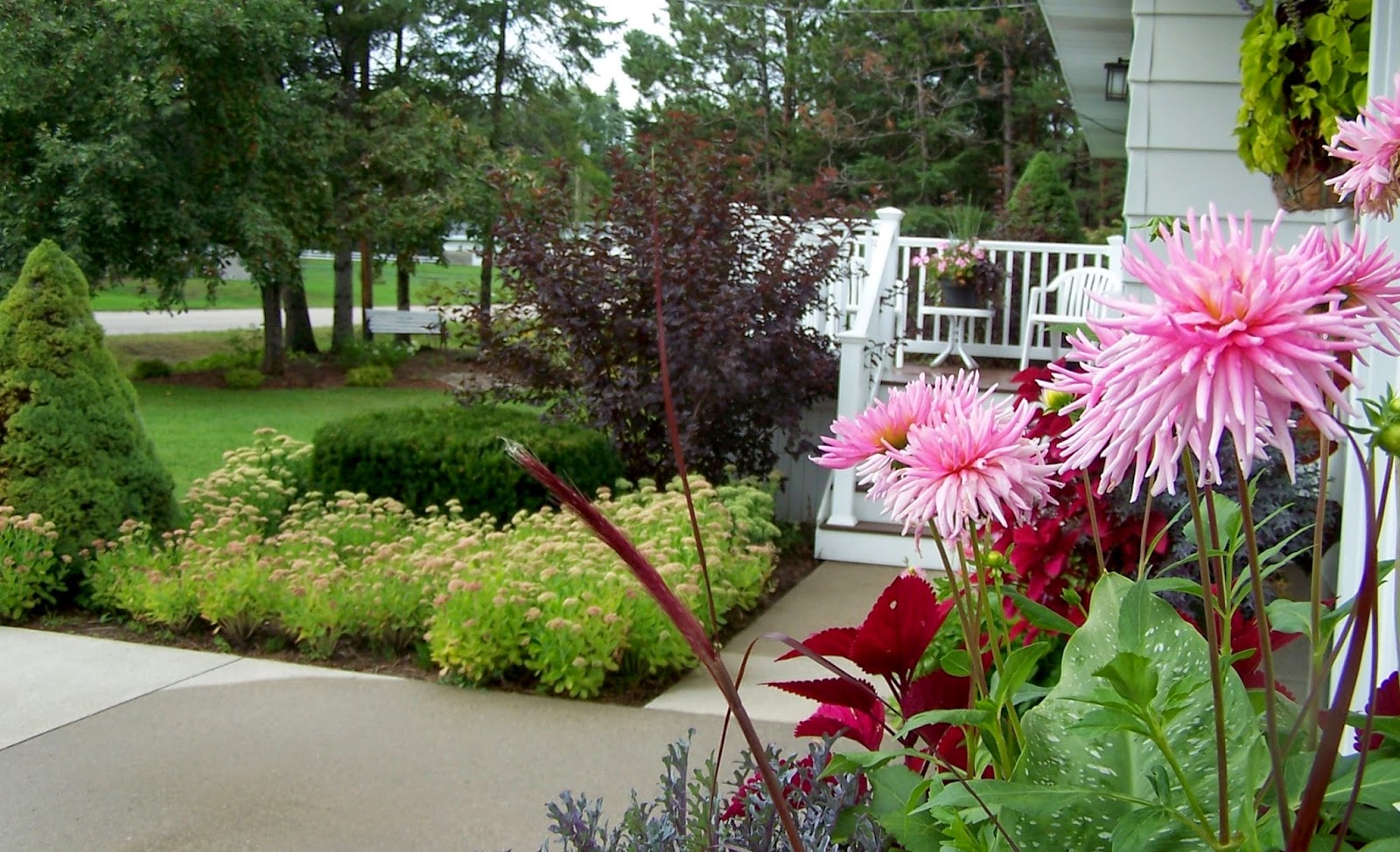 The cold weather kept them at a shorter height which worked out nicely this year.

I have them in a few other gardens and in containers on the deck: 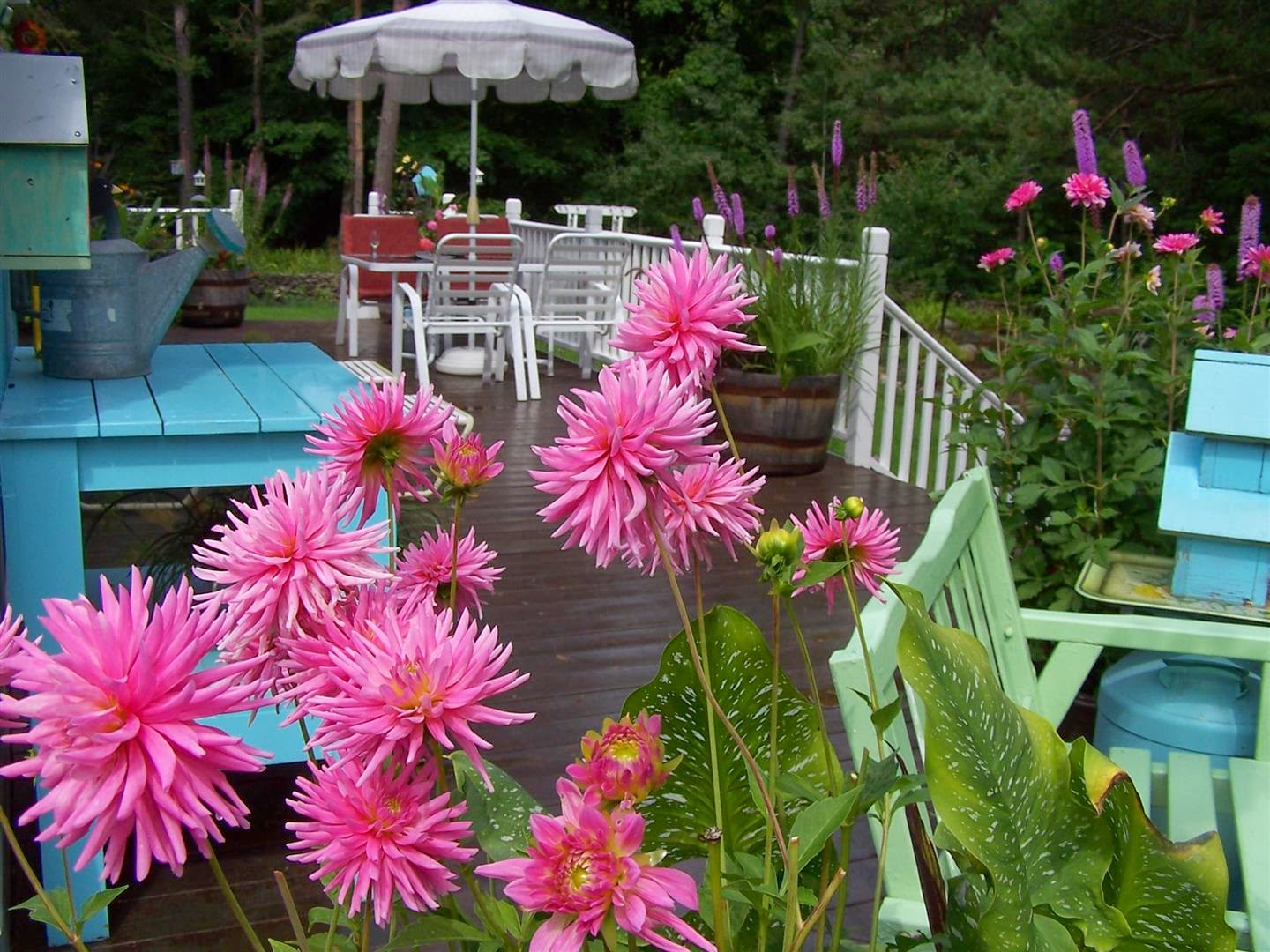 I don't remember my liatris (tall purple spikey things in the background) blooming so late before.

My Shrub Borders are at Their Best Right Now 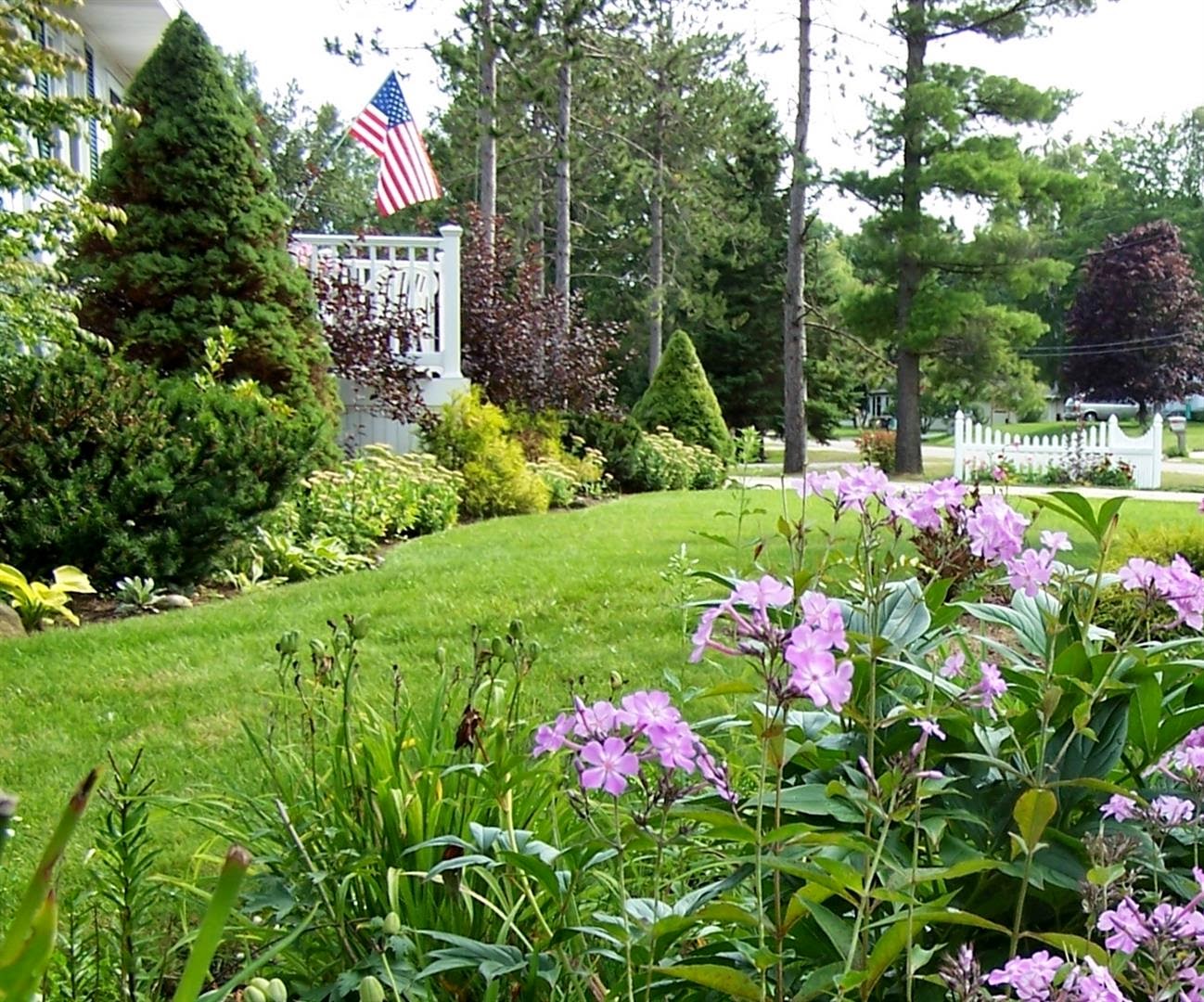 I took these pics less than an hour ago.  This is the front of my home  looking from the perennial gardens to the new picket fence garden.

This is at the garage entrance looking toward the same picket fence road garden. 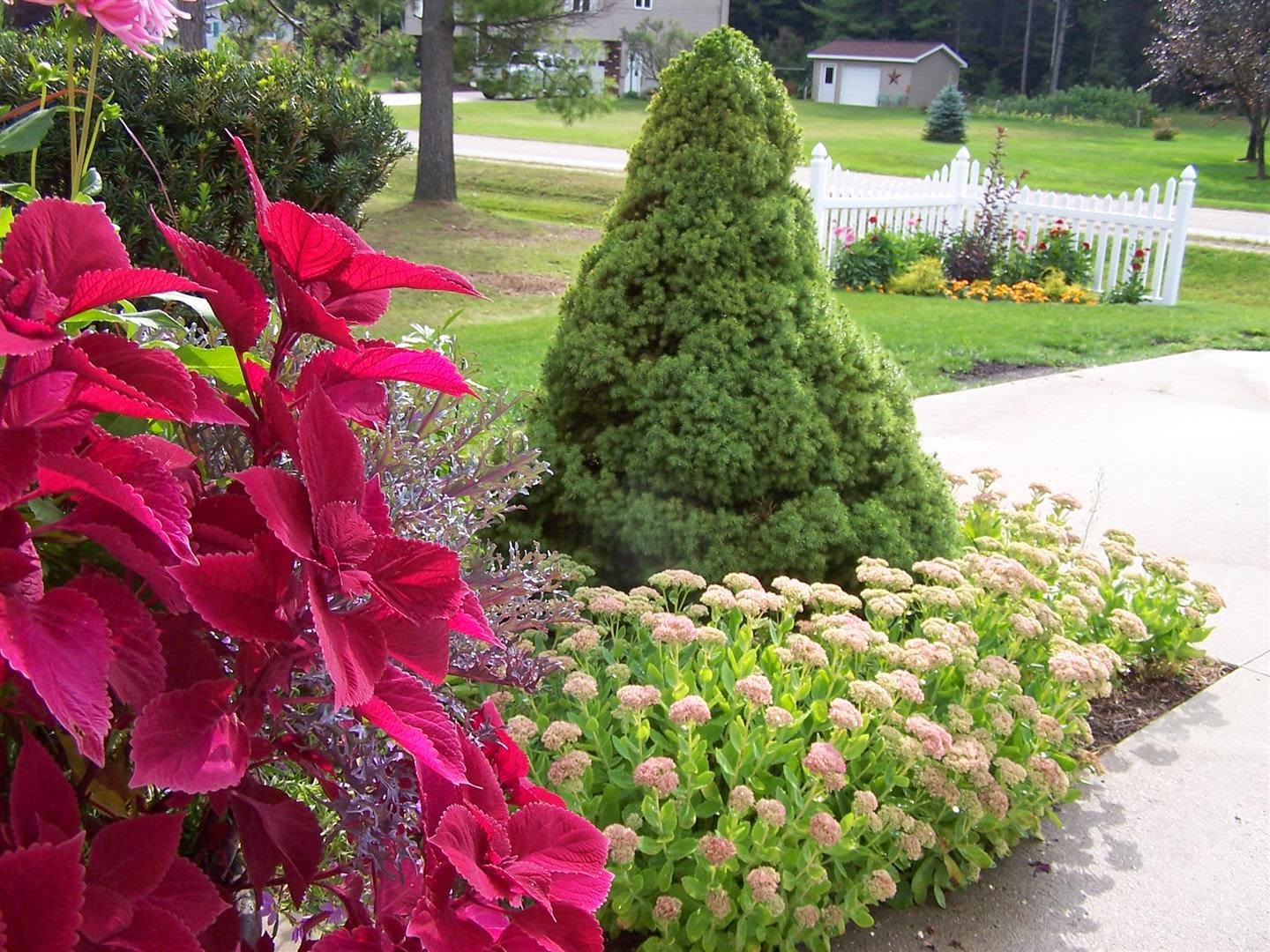 And this is the picket fence garden.  It is planted with a Ninebark and 2 Golden Cypress Mophead shrubs.  Since the shrubs are still small, I filled the garden in with red and pink dahlias and J's favorite flower, marigolds. 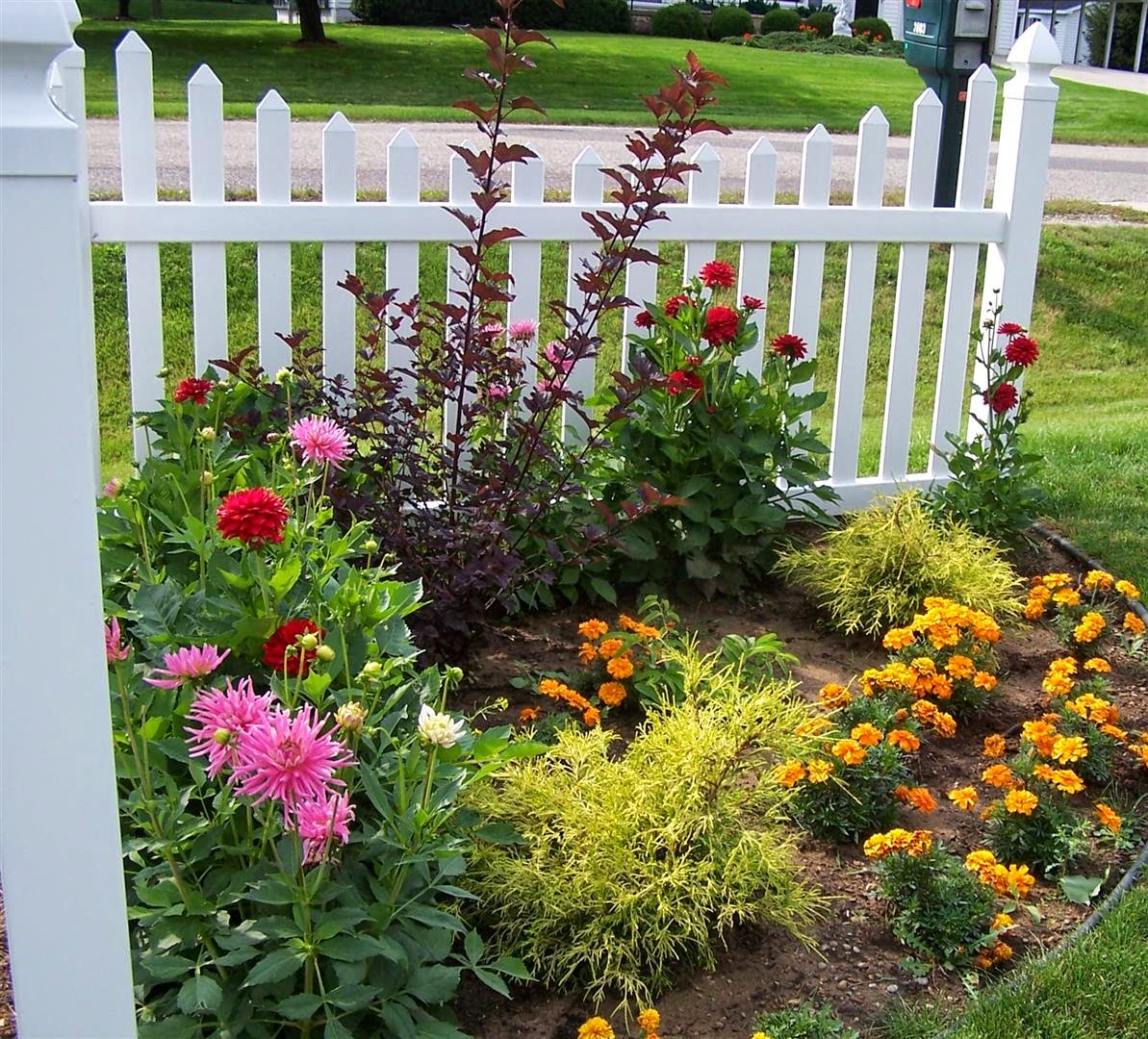 I am happy to report that all of the Limelight Hydrangeas that I planted last fall are doing great. 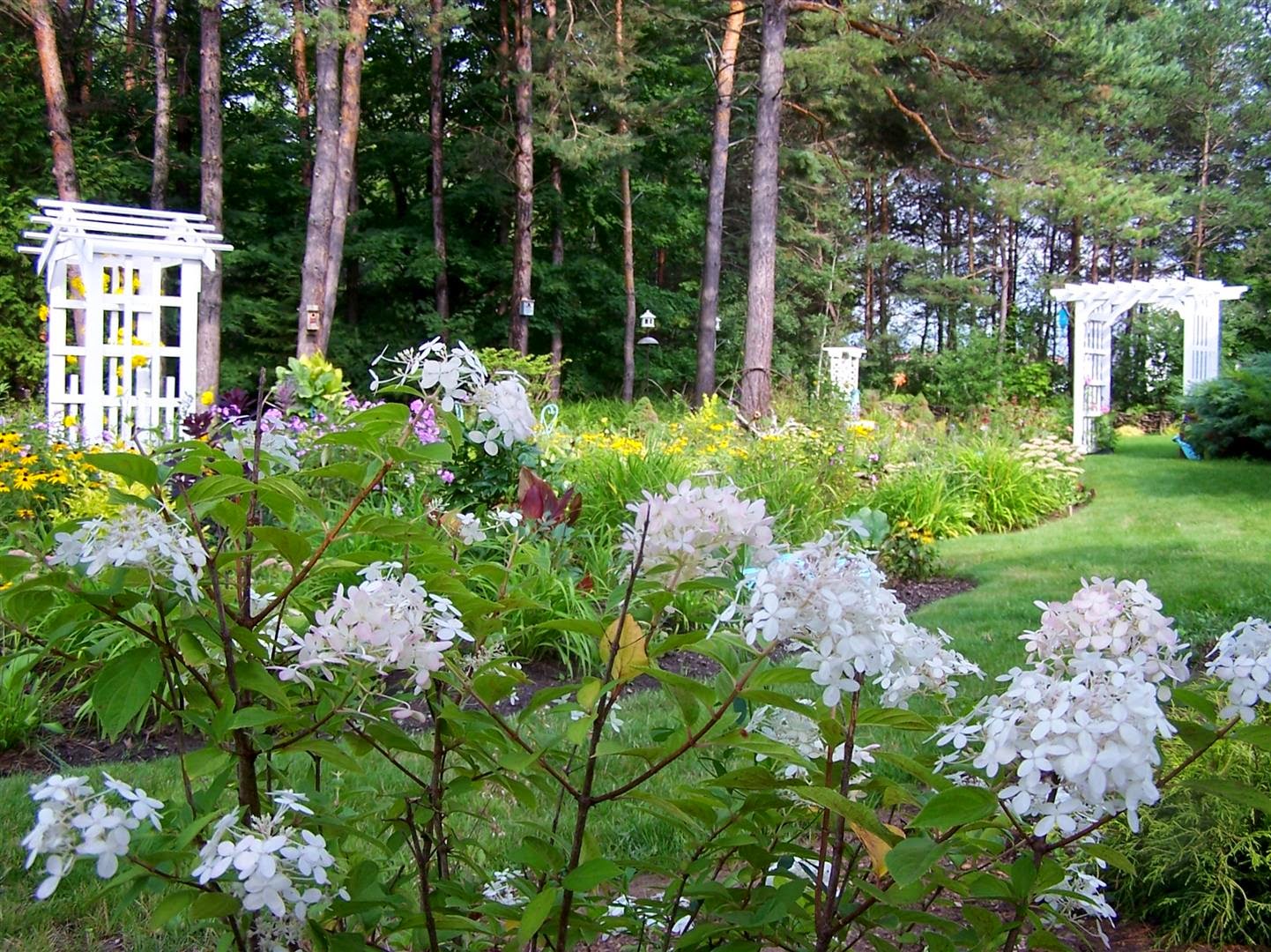 I put three of them in the old apple tree border.
Same area looking in the opposite direction toward the picket fence road garden. 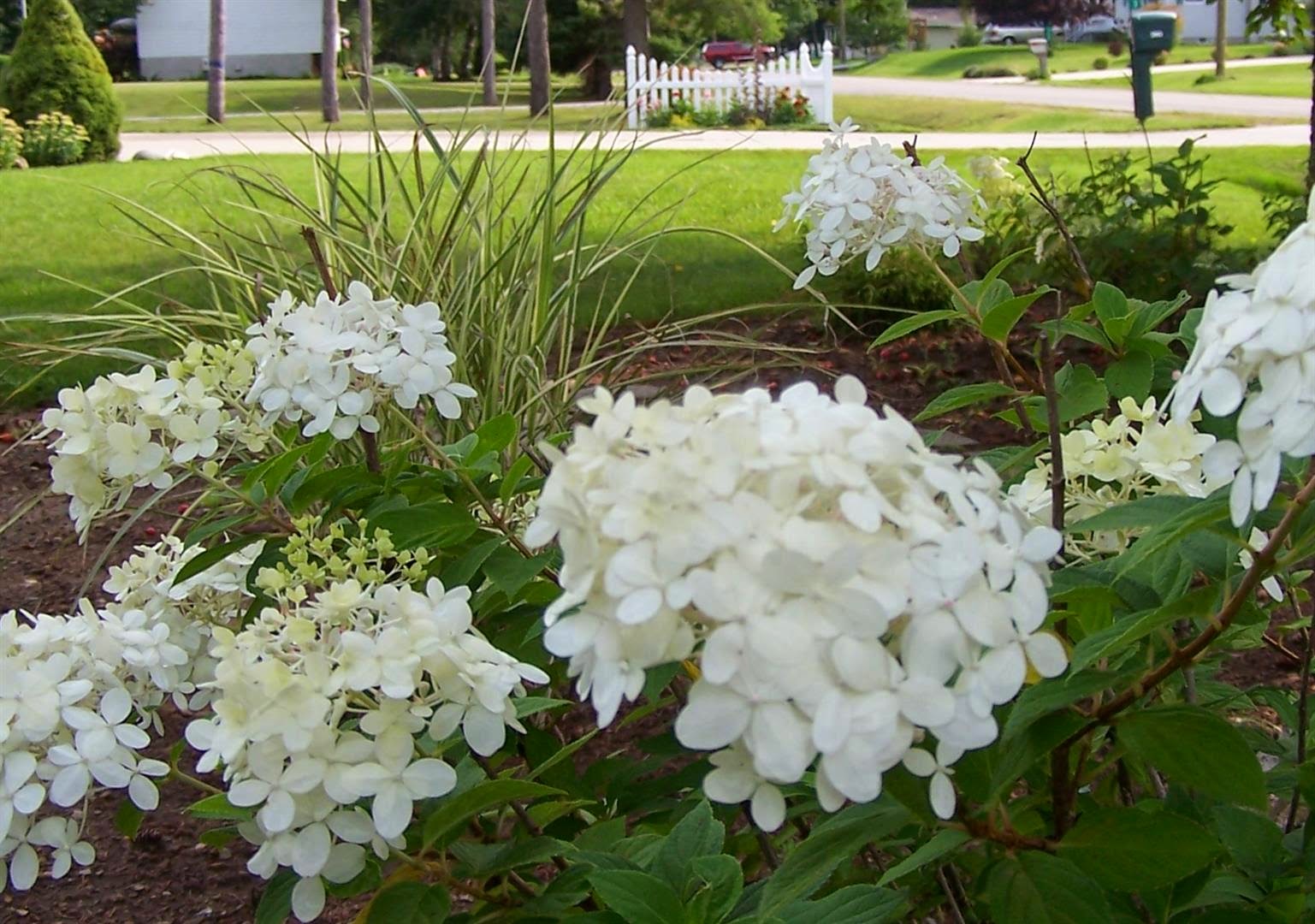 Did you notice all of the sedums just beginning to turn pink in my driveway borders?  I have dozens of them.  This is next to the sidewalk to the front door looking toward the old apple tree border: 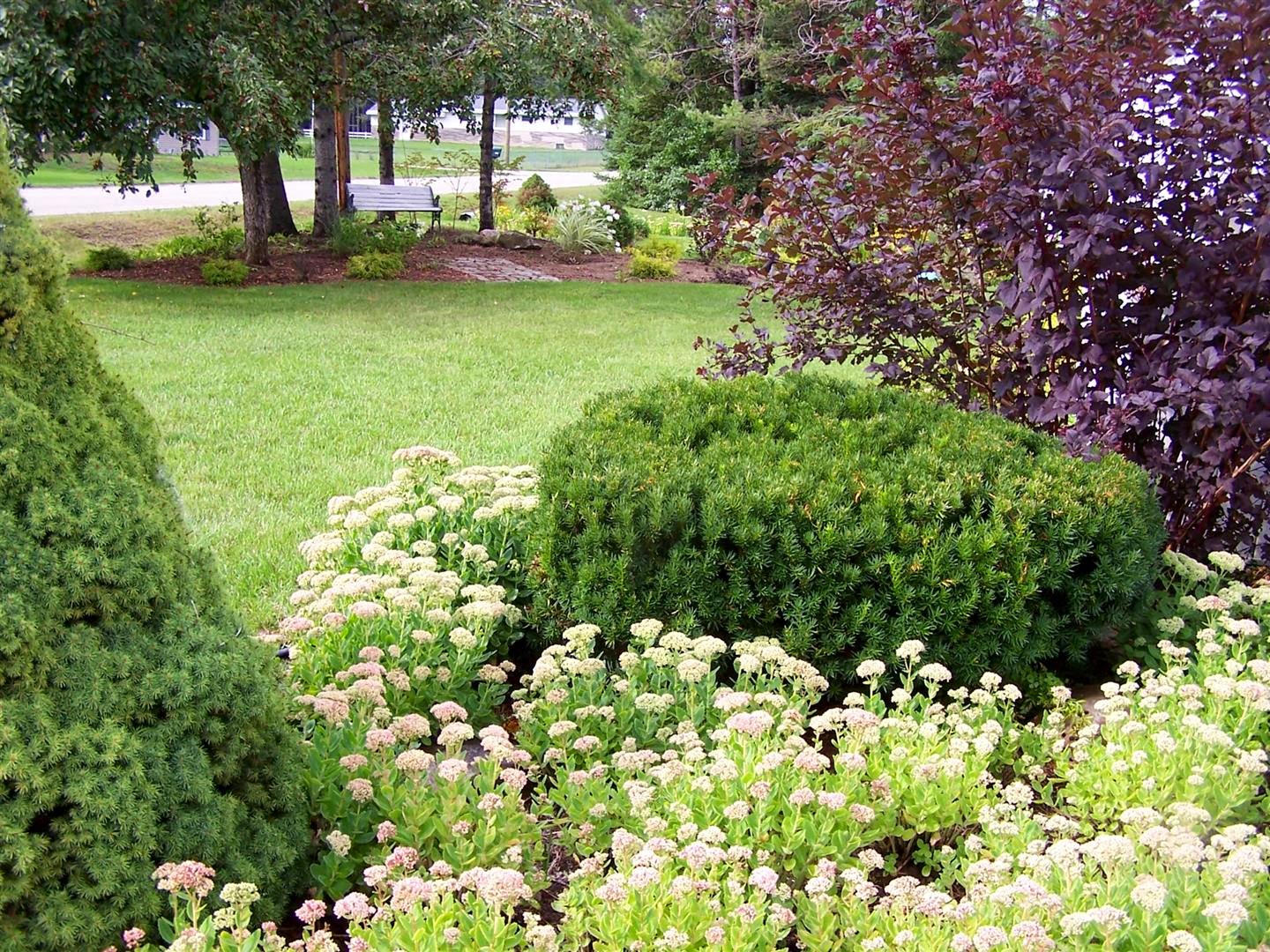 A few feet to the right looking in the exact spot where the apple tree stood.  We are loving living without that tree there. This is the first time in over a quarter century that we have not had to pick up apples every day in late summer. In a week the sedum will all be a lovely medium pink  color.  In two weeks they will turn their rust color and then sadly summer is over.  It goes faster every year, don't you think? 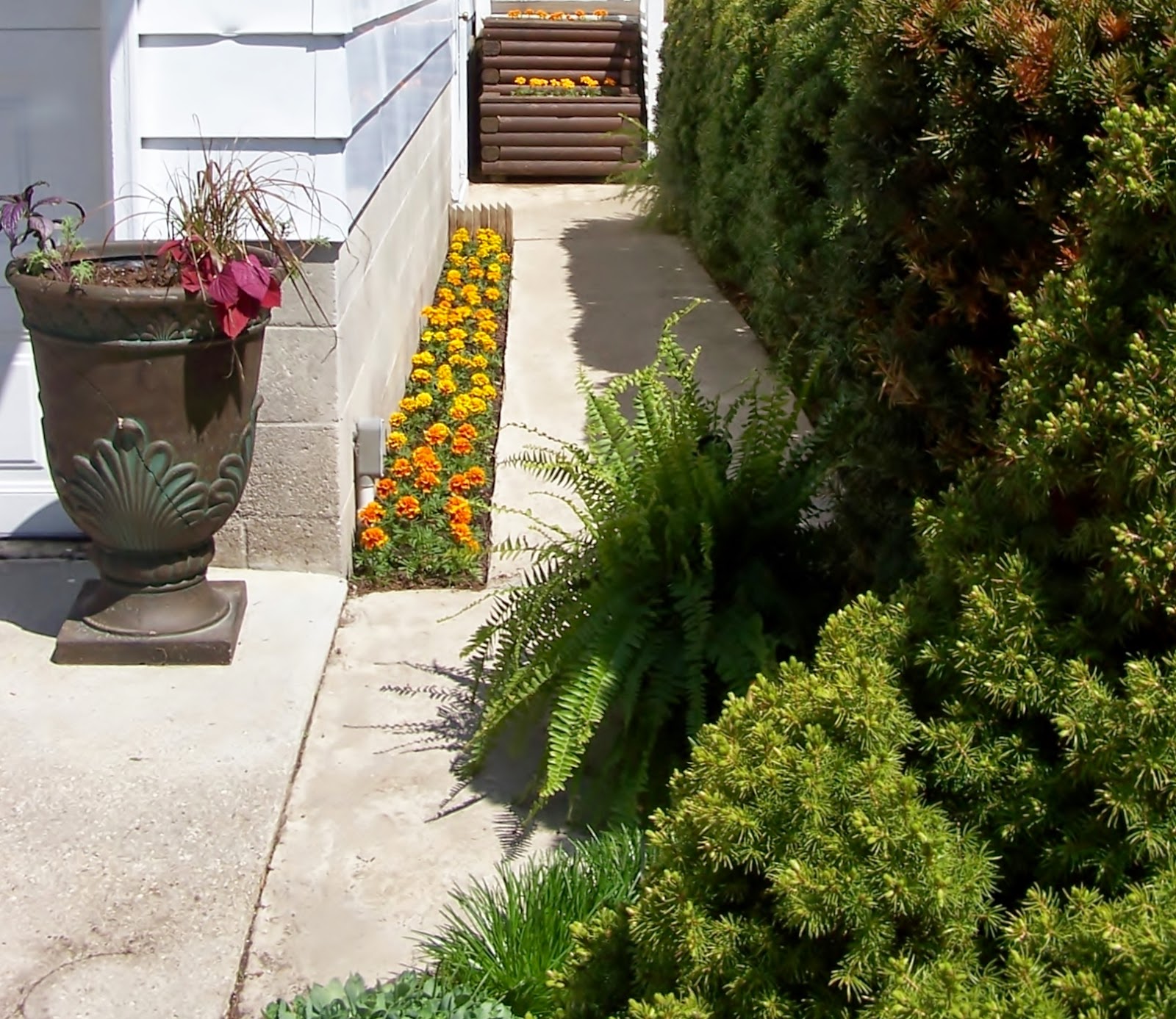 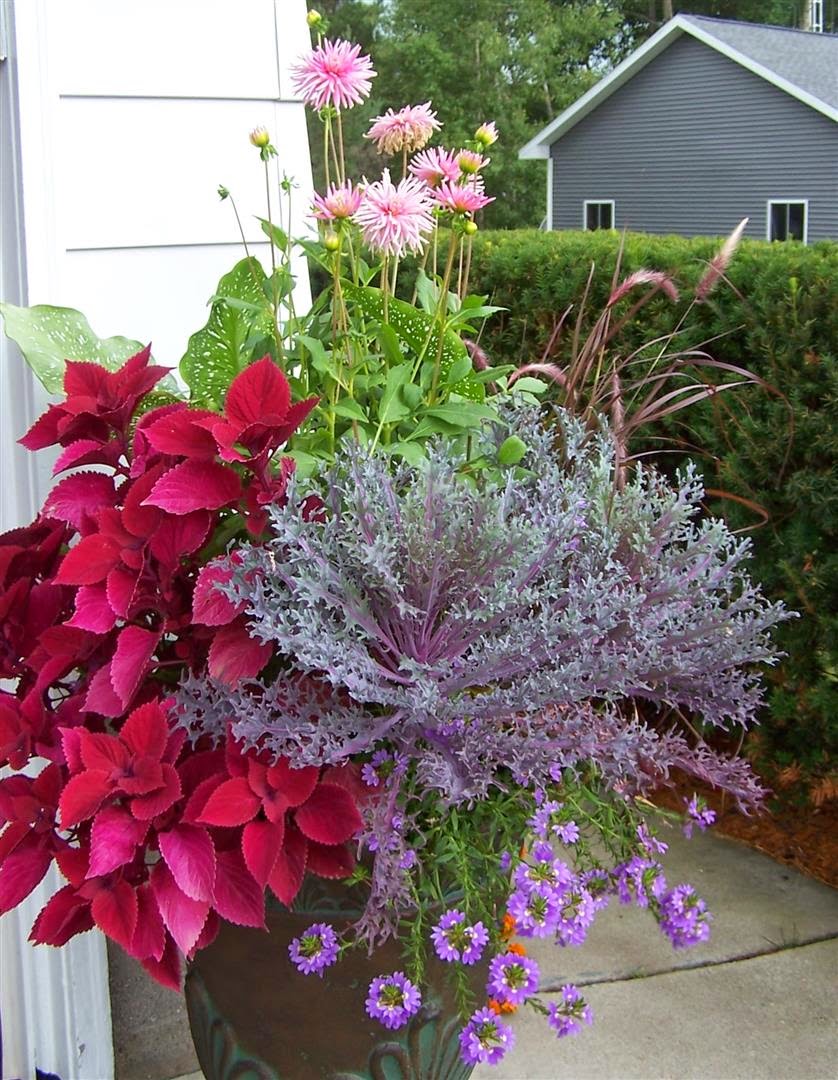 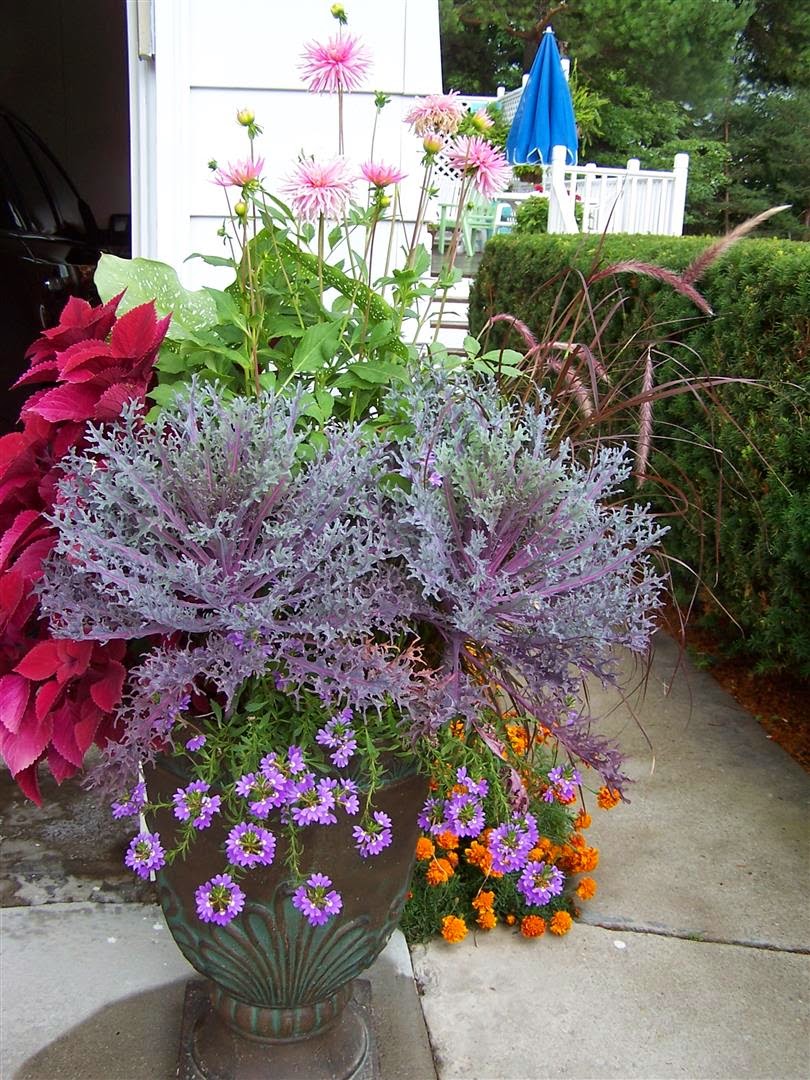 On a Clear Day You Can See Canada

I took a couple of days off last week and J and I traveled to Paradise, Michigan to stay at Whitefish Point.

They have a museum dedicated to the ships who met their demise in these waters: 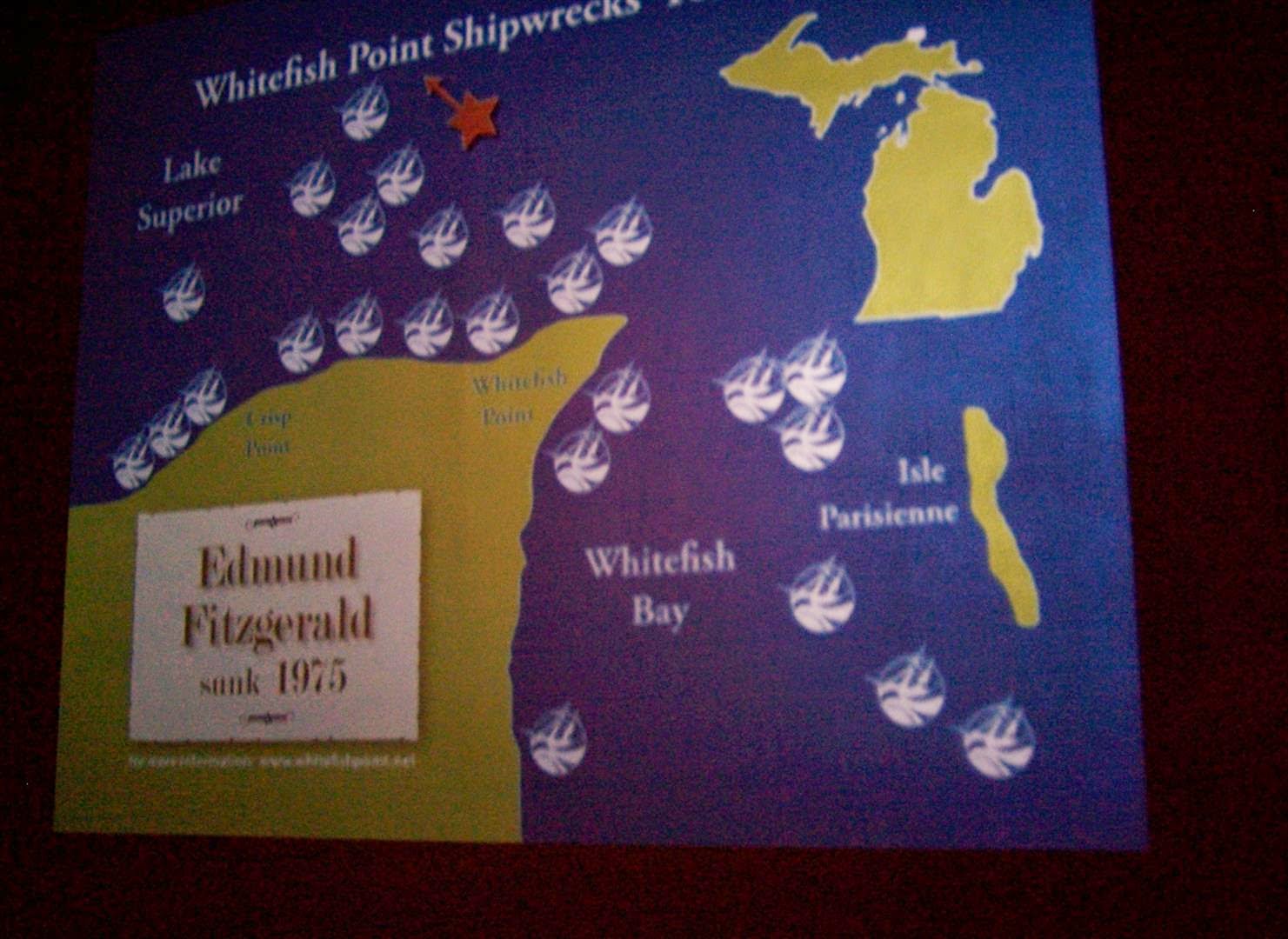 The museum has many artifacts from the Edmund Fitzgerald, including the 200 lb. bronze bell   recovered by the Great Lakes Shipwreck Historical Society on July 4, 1995: 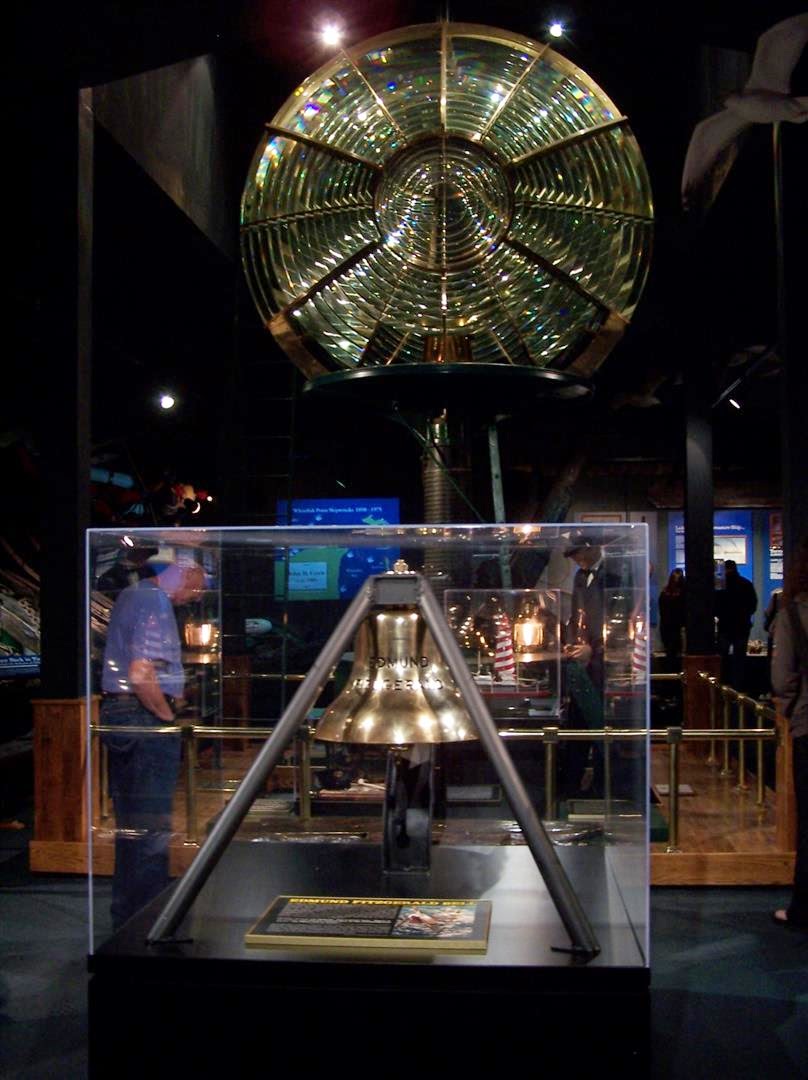 Here is J arriving at  the original U.S. Coast Guard barracks building, constructed in 1923 for the Whitefish Point Lifeboat Rescue Station.  It has been meticulously restored by the Great Lakes Shipwreck Historical Society with assistance from Michigan Council for Arts & Cultural Affairs and the Michigan Department of Transportation. 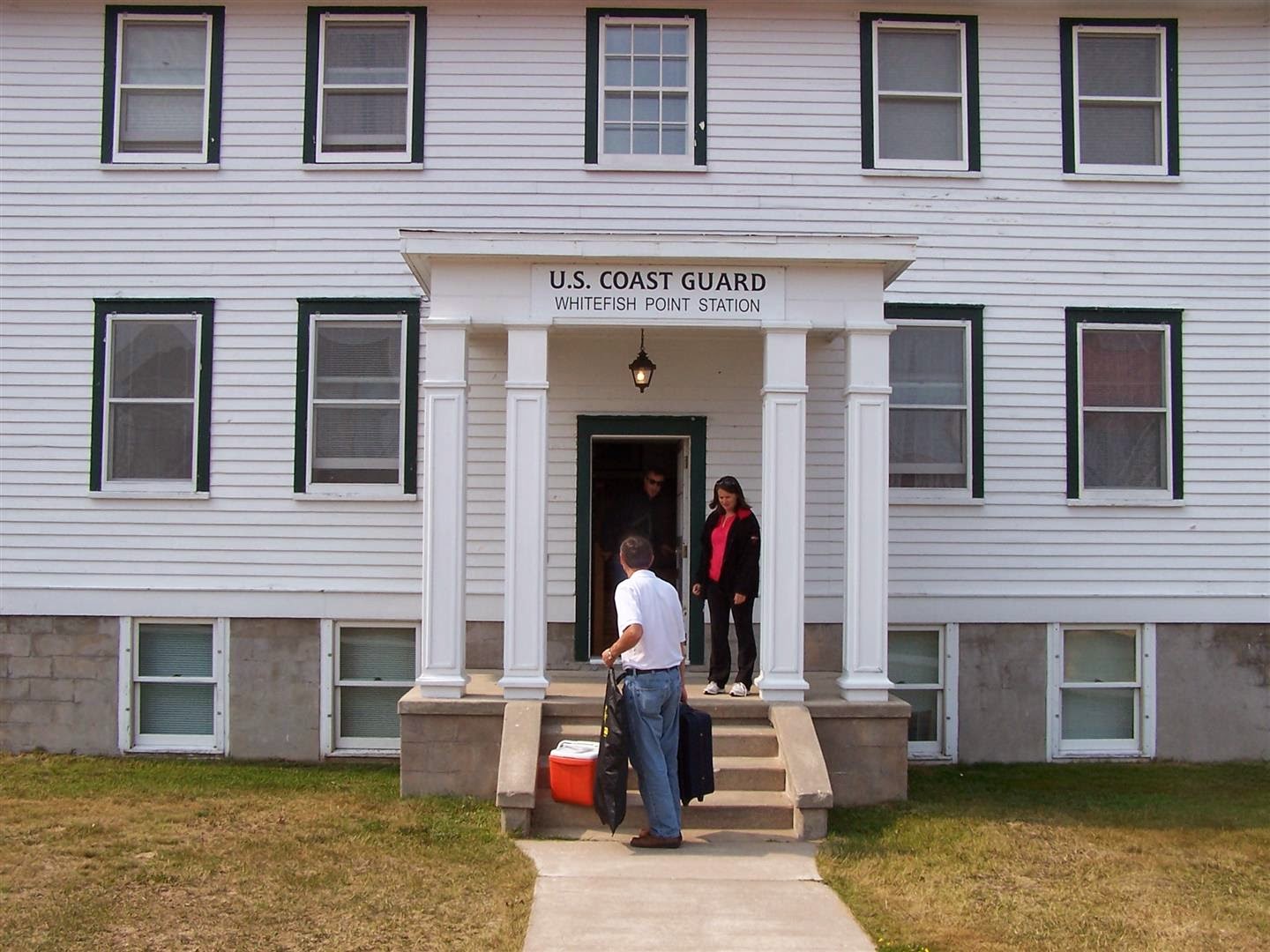 There are only 5 rooms available each night. This was our room: Room 1: Station Engineer’s, queen bed second floor

The present light tower was constructed in 1861 during Abraham Lincoln's administration. This is the view of the lighthouse from our room right after the sunrise on Friday morning: 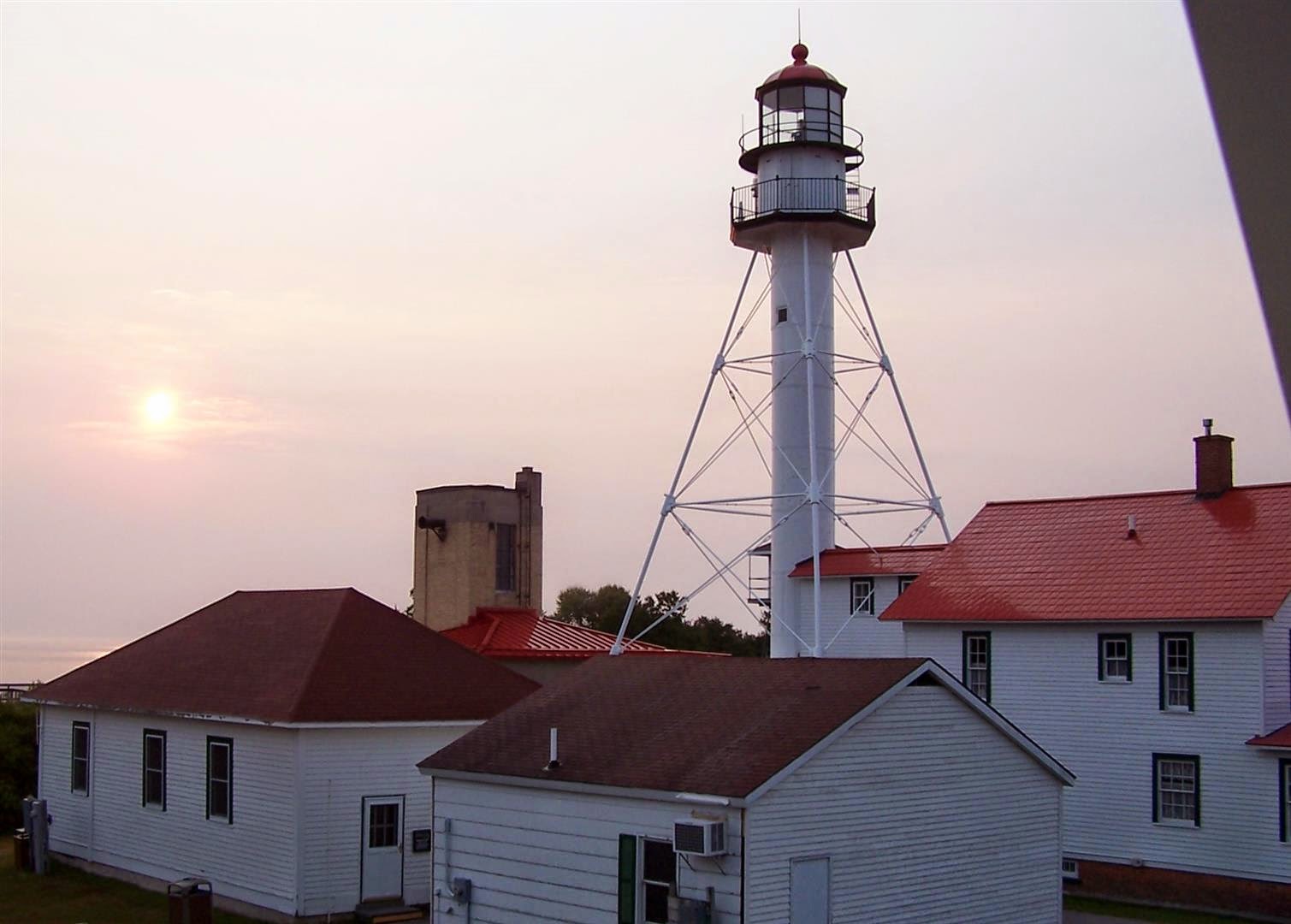 In addition to the  five rooms that can be rented each night, there is a living room shared by all: 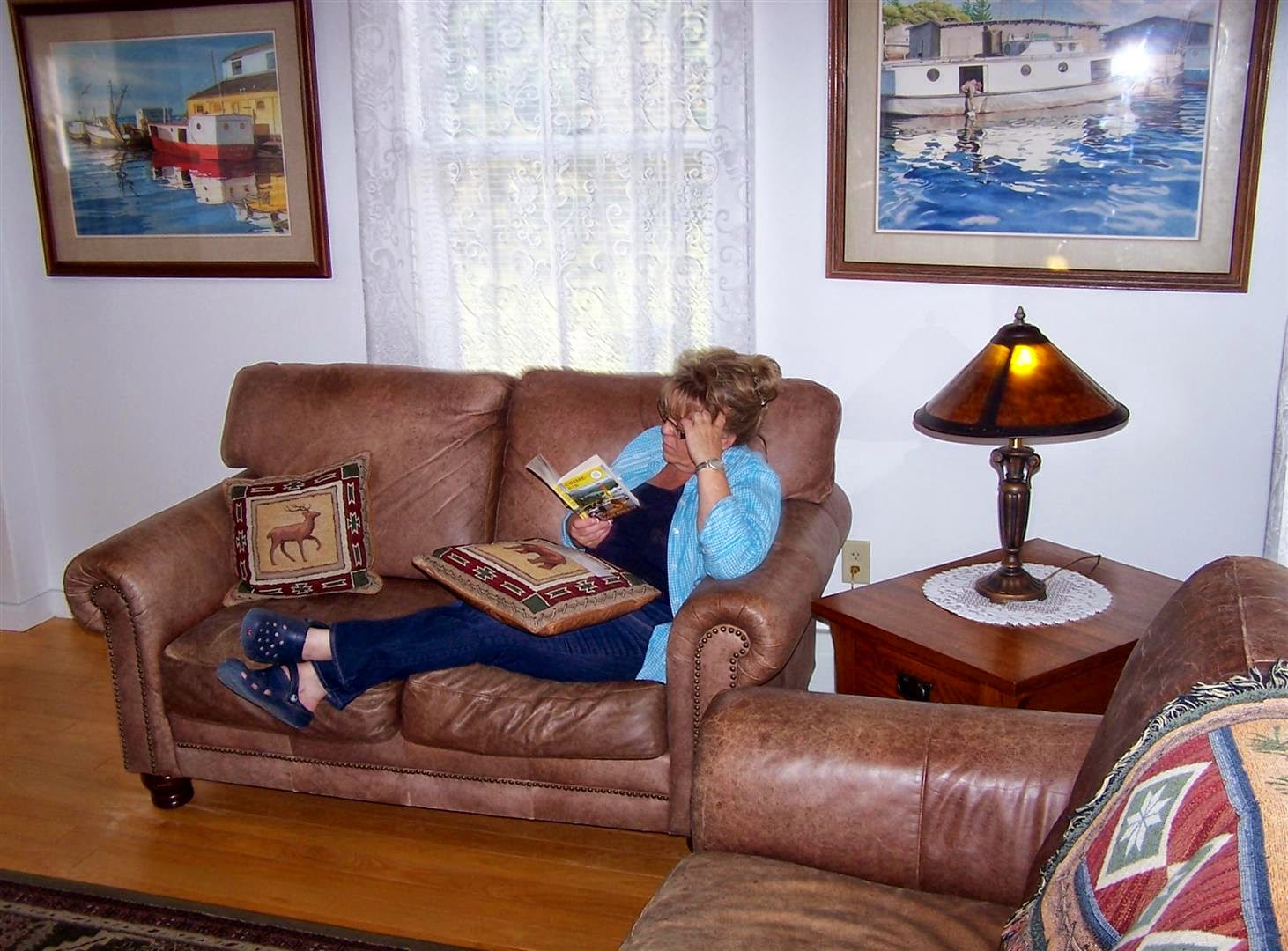 Where I spent an hour or so reading my current culinary mystery novel before retiring to my room for the evening.
J really enjoyed the community kitchen 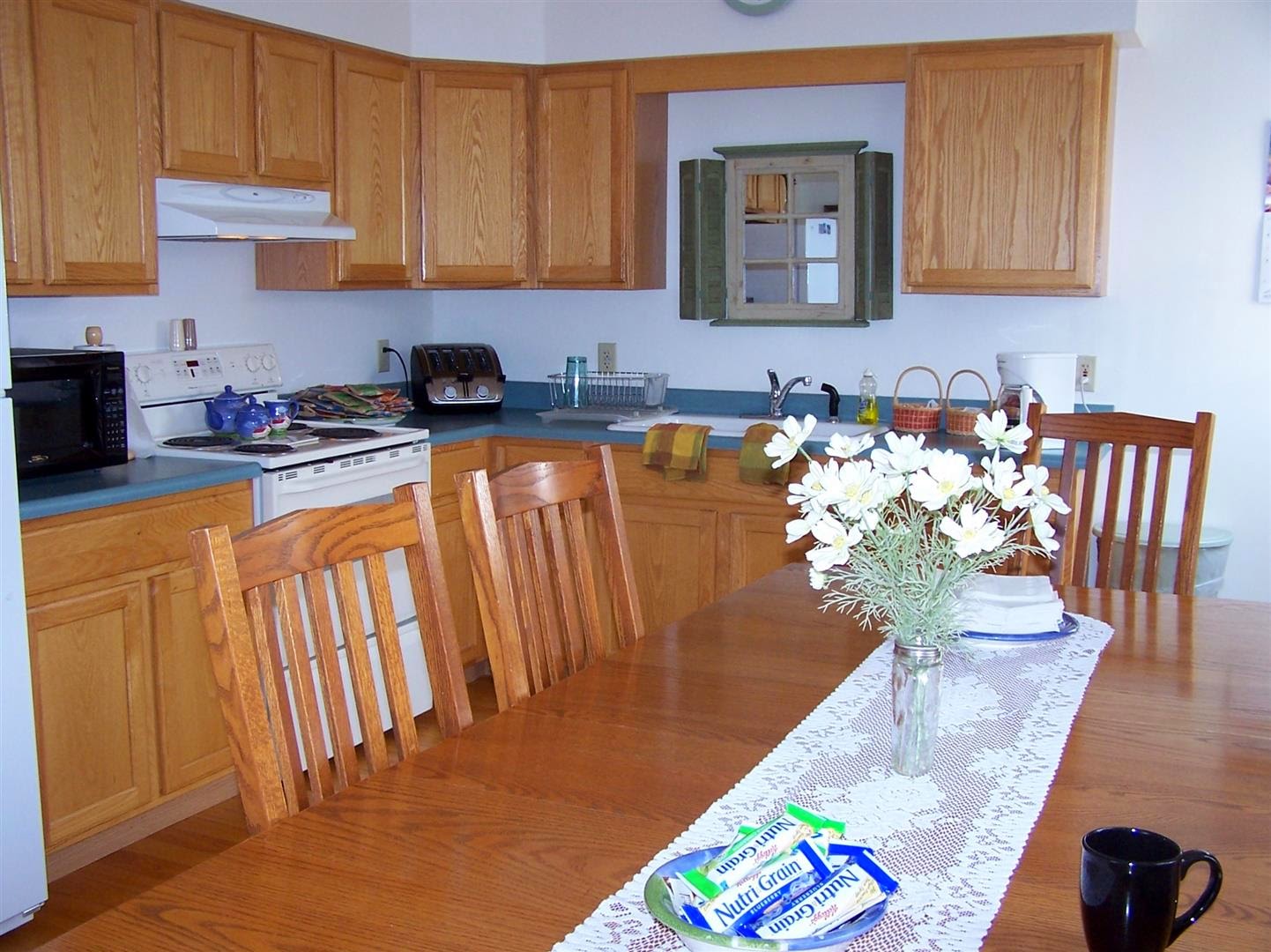 which was stocked to the brim with breakfast/snack items: We had a very enjoyable late afternoon cup of coffee together. 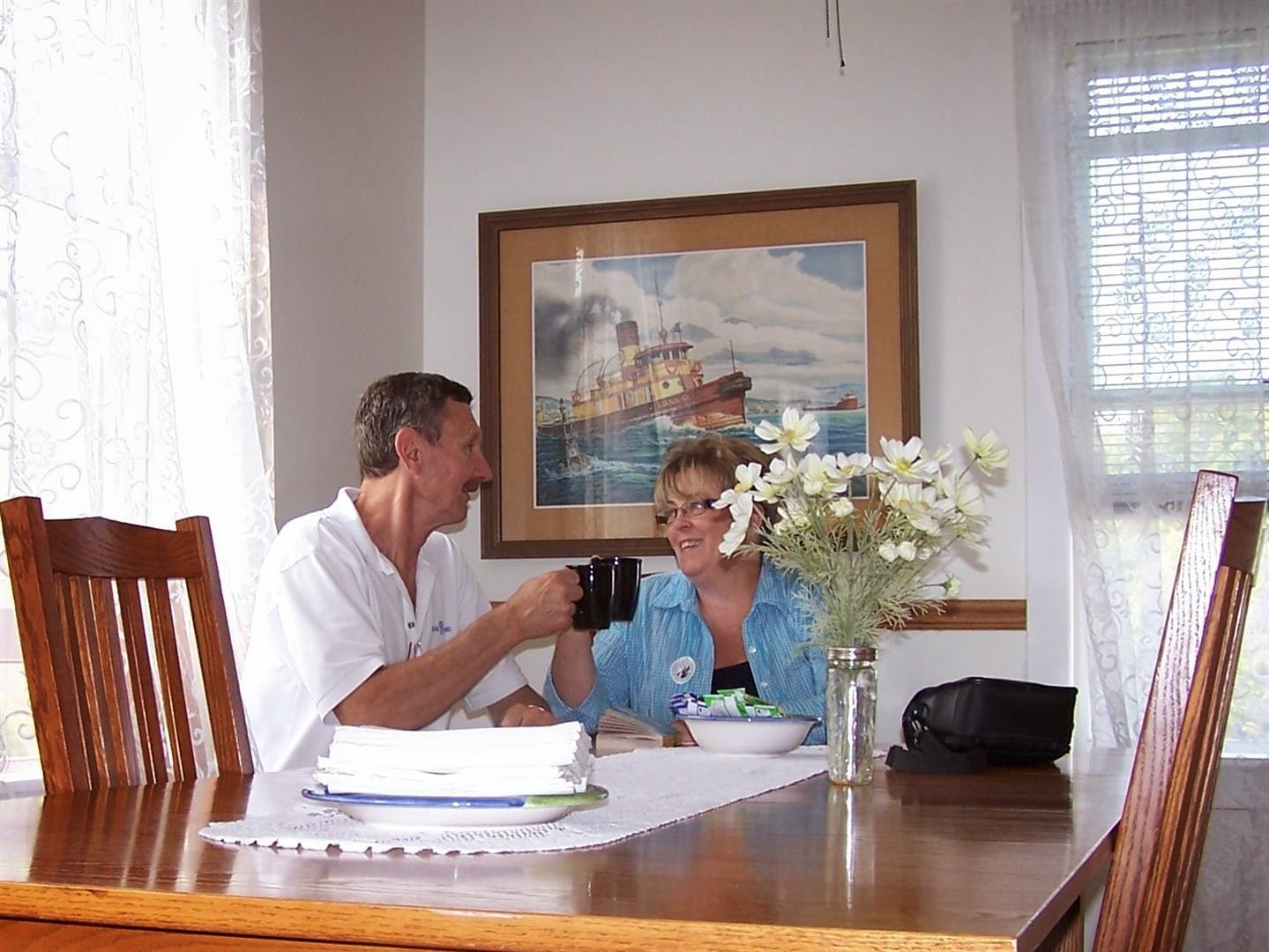 We also walked along the Lake Superior shoreline and picked rocks to bring home.  Many people were doing the same--I guess everyone wants some souvenir rocks. :)  I put some of mine on the deck as a reminder of our wonderful evening in the UP (upper peninsula): 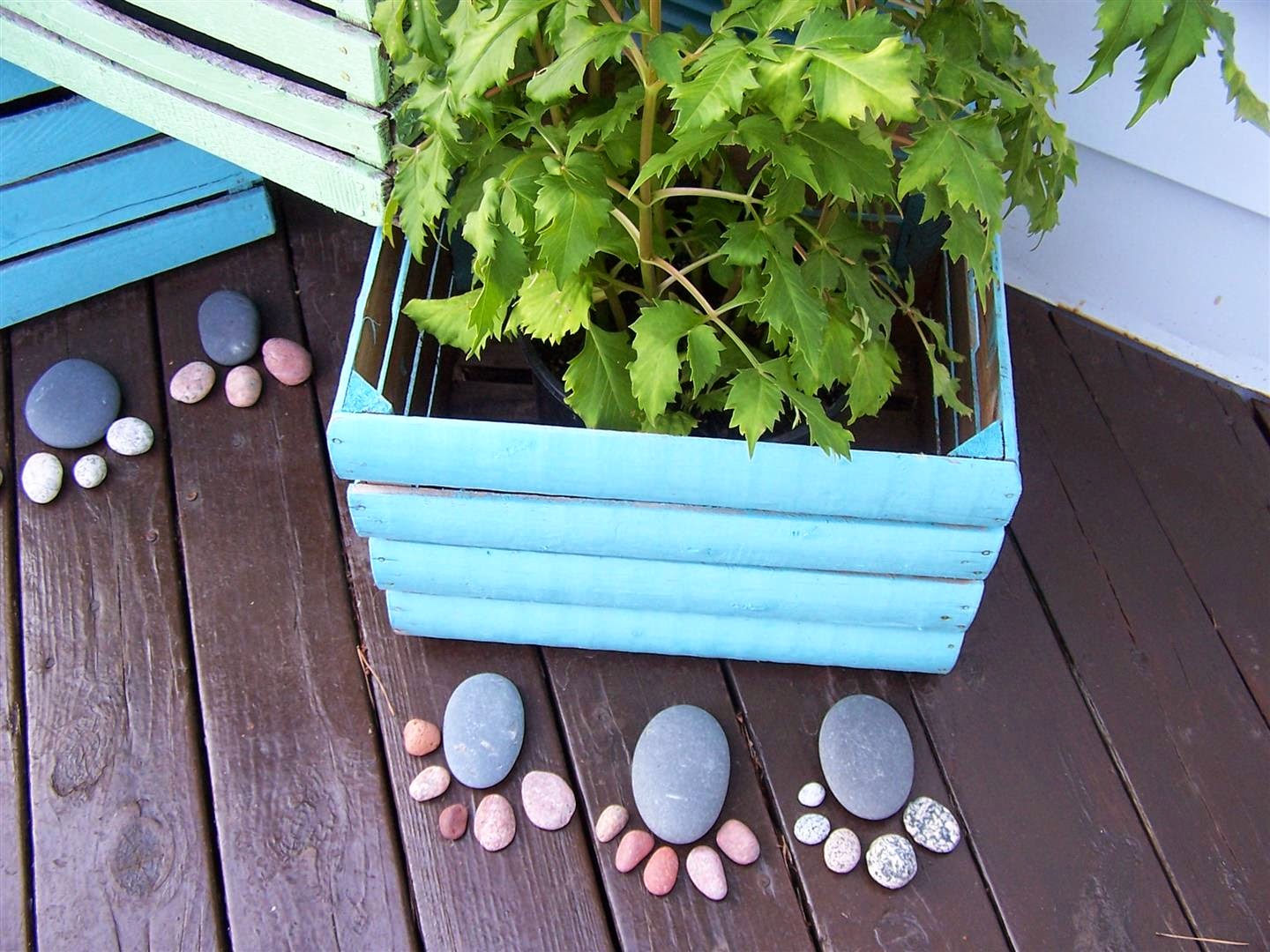 We thoroughly enjoyed our stay at Whitefish Point.

Unfortunately I was so busy collecting rocks that I did not take a picture of Lake Superior.  Lake Superior is the largest of the Great Lakes.  On a clear day you can see Canada from the shores of Whitefish Point.
Posted by Diana LaMarre at 8/11/2014 07:31:00 PM 5 comments:

This branch is so heavily loaded that it hangs to the ground, making a nice frame for garden pics. :) 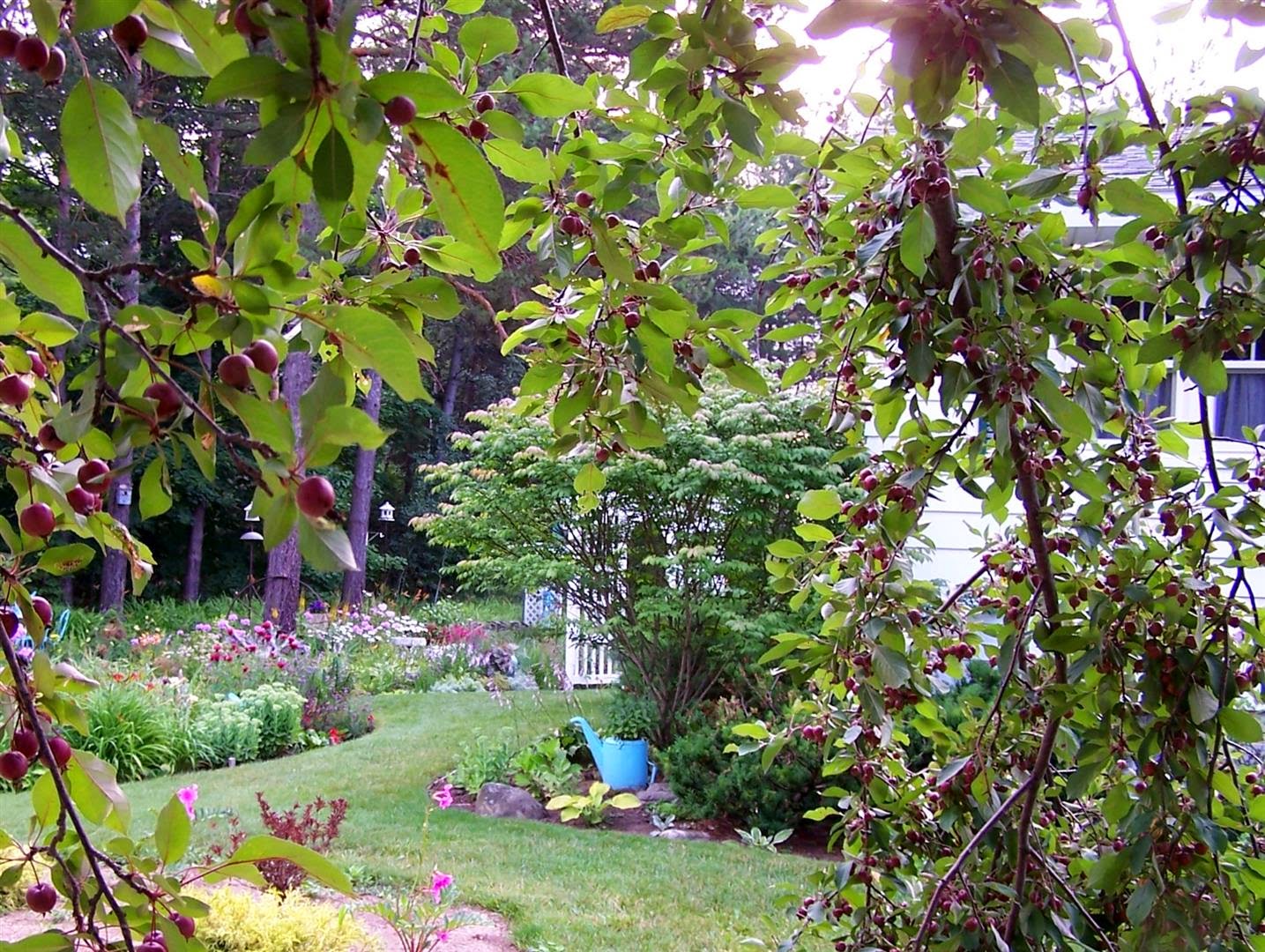 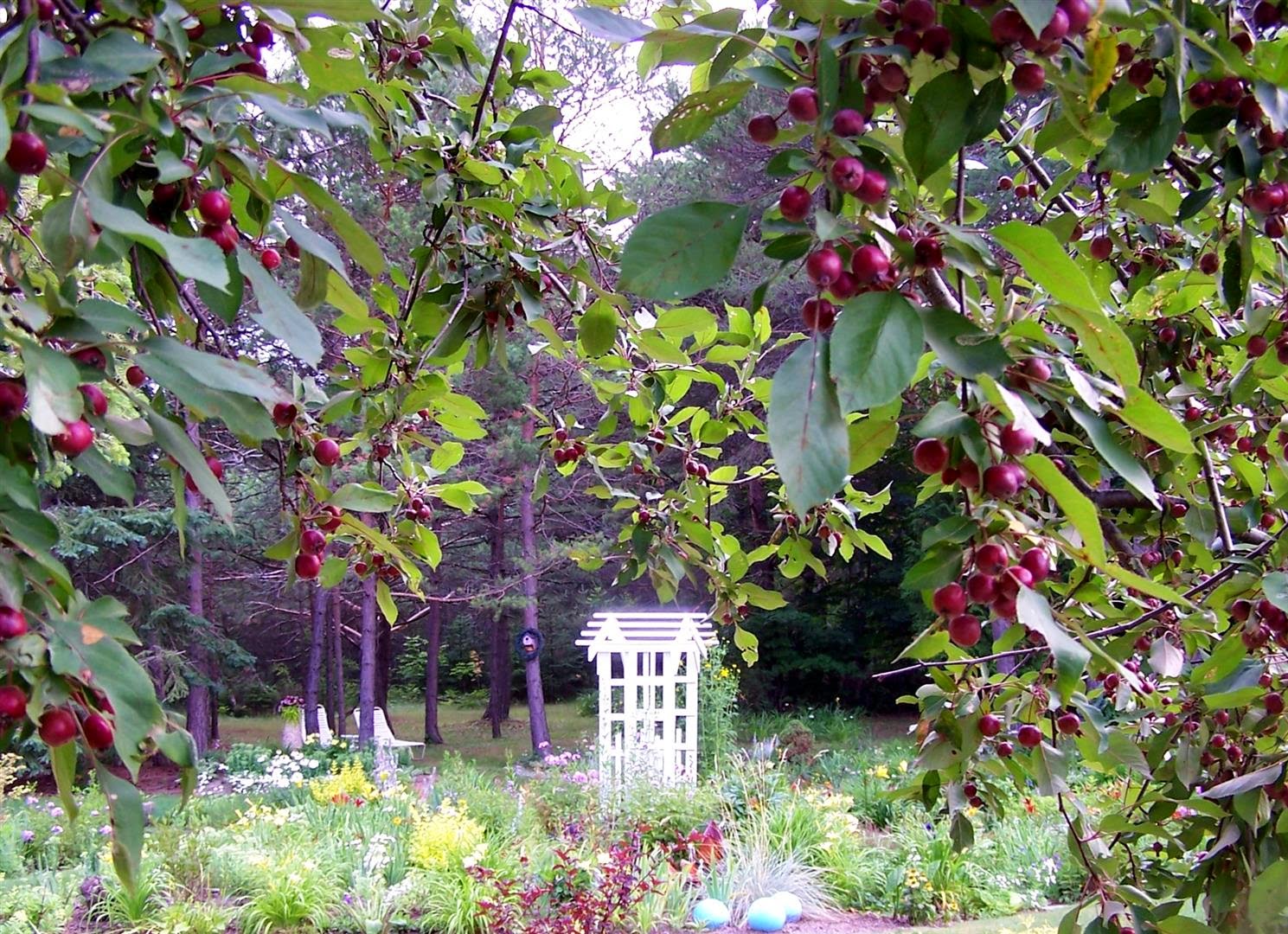 I am sure the birds will enjoy them soon.

The Ligularia is blooming.  I really enjoy this plant. 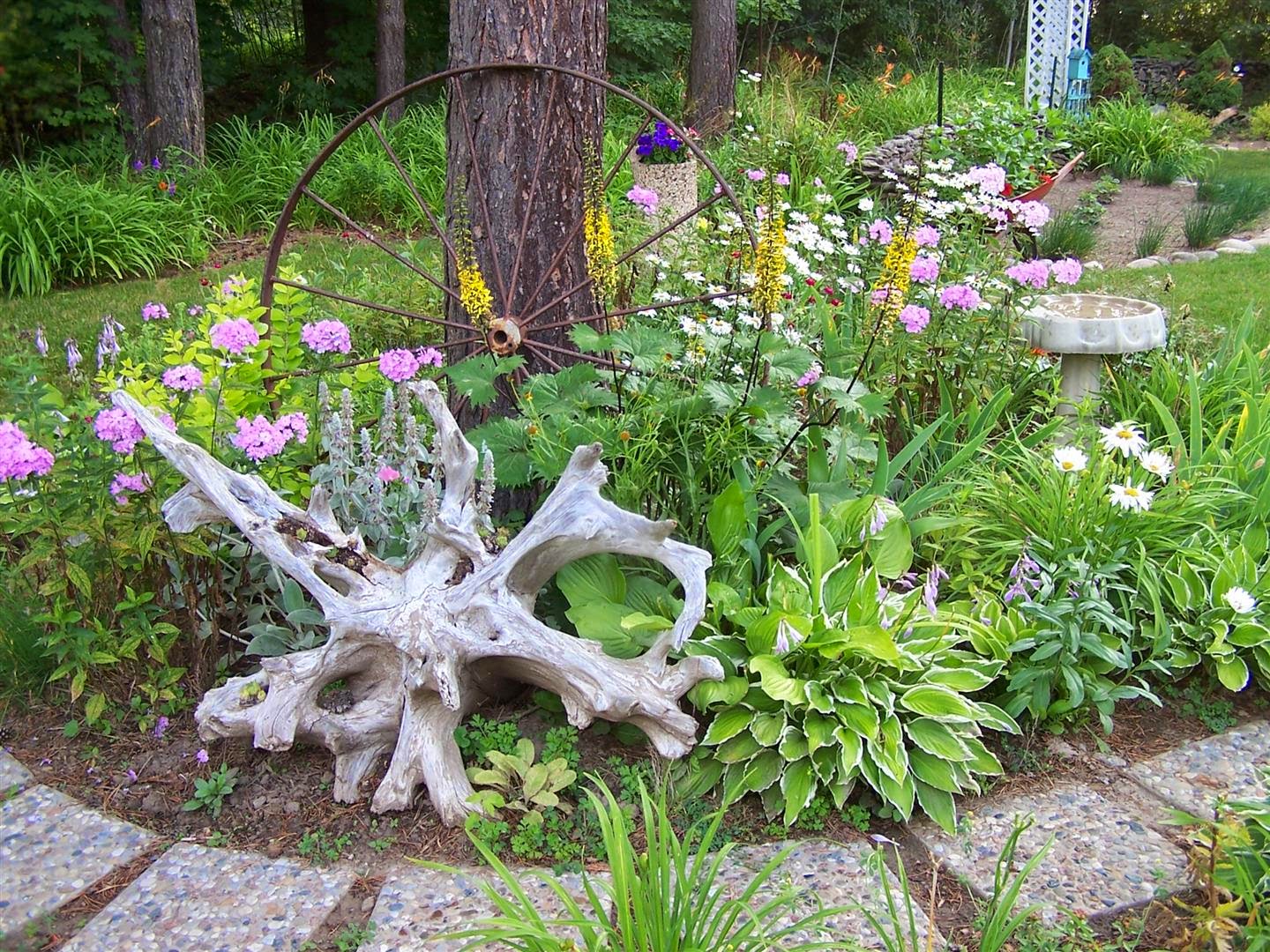 It is planted in a container, so each year I can move it around. I am enjoying it next to this wagon wheel. 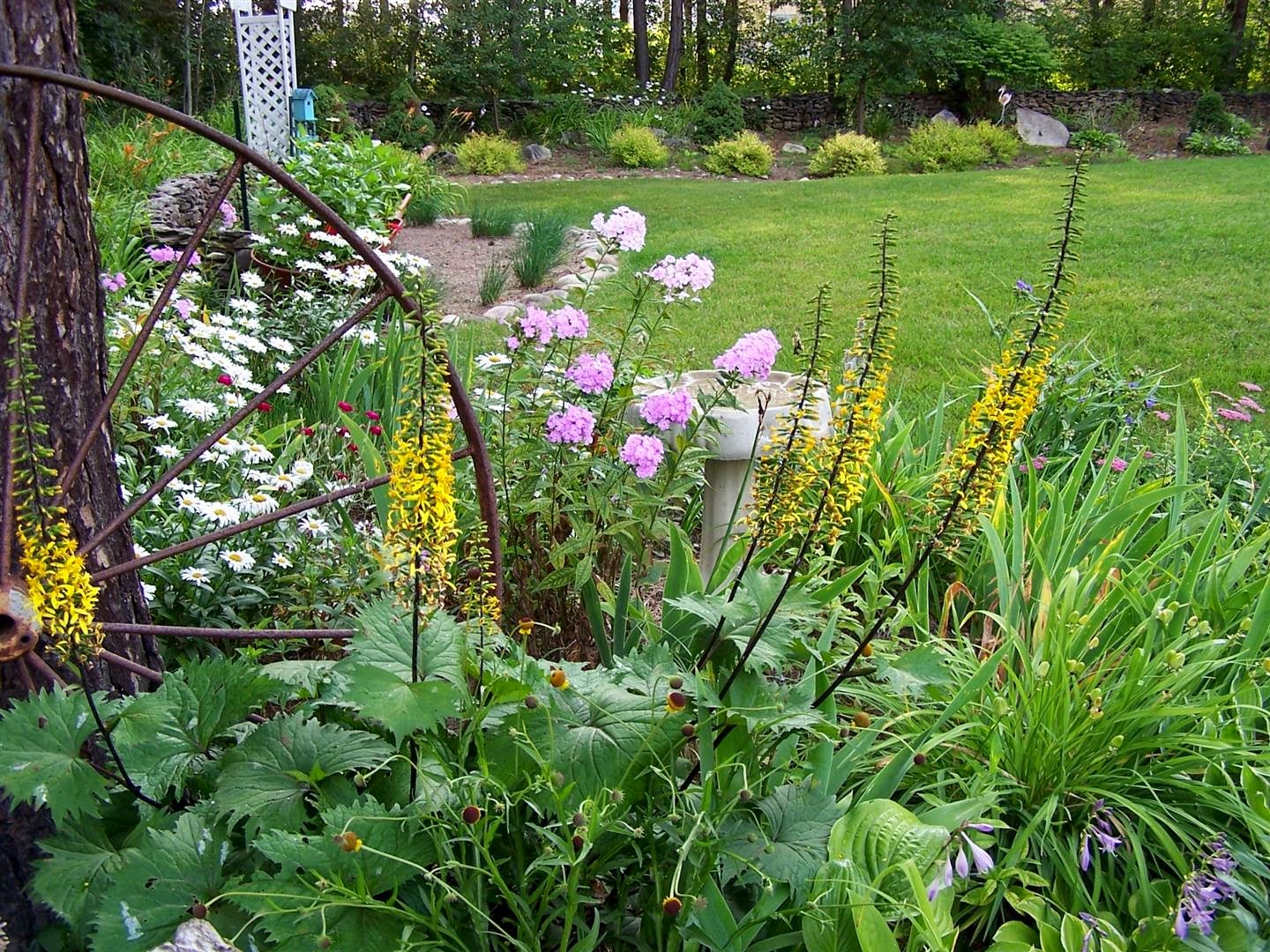 Right in the front I have Helenium 'Lollipop', another new purchase this year. 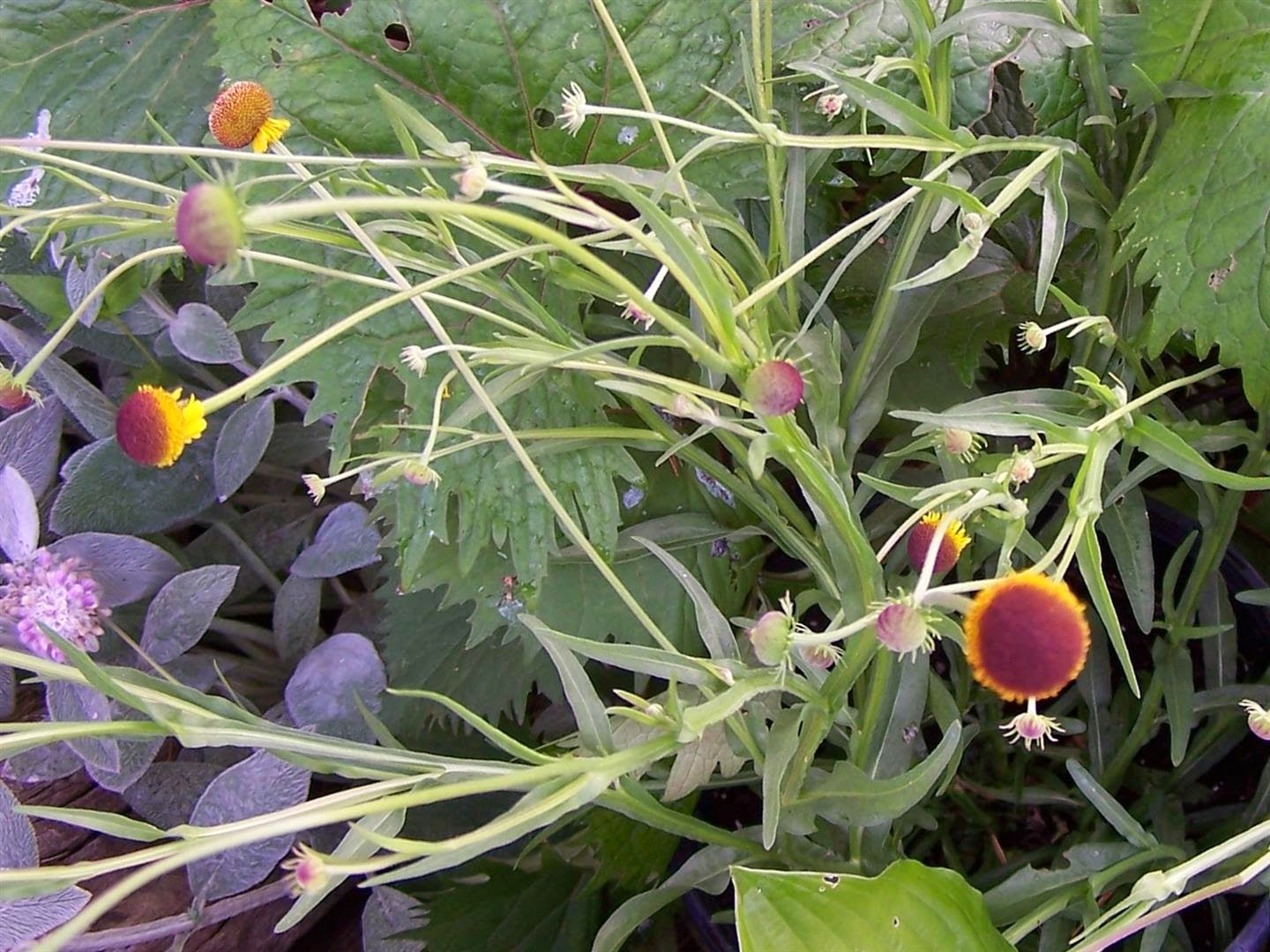 I love the unusual form of this flower--tiny little eyeball with a wee frill of ruffled petals on the underside.  This flower is fully open. I think it's a great contrast to Ligularia's large coarse leaves and tall spiky blooms.  It needs to be planted in the front of a border to be appreciated.

I usually cut down hosta blooms because they are  too tall and messy for my liking.  Since the deer ate dozens of my hostas, I don't have many to cut down this year. Somehow this one escaped the deer and I decided I like its flowers in front of the pink speedwell so I left them on. 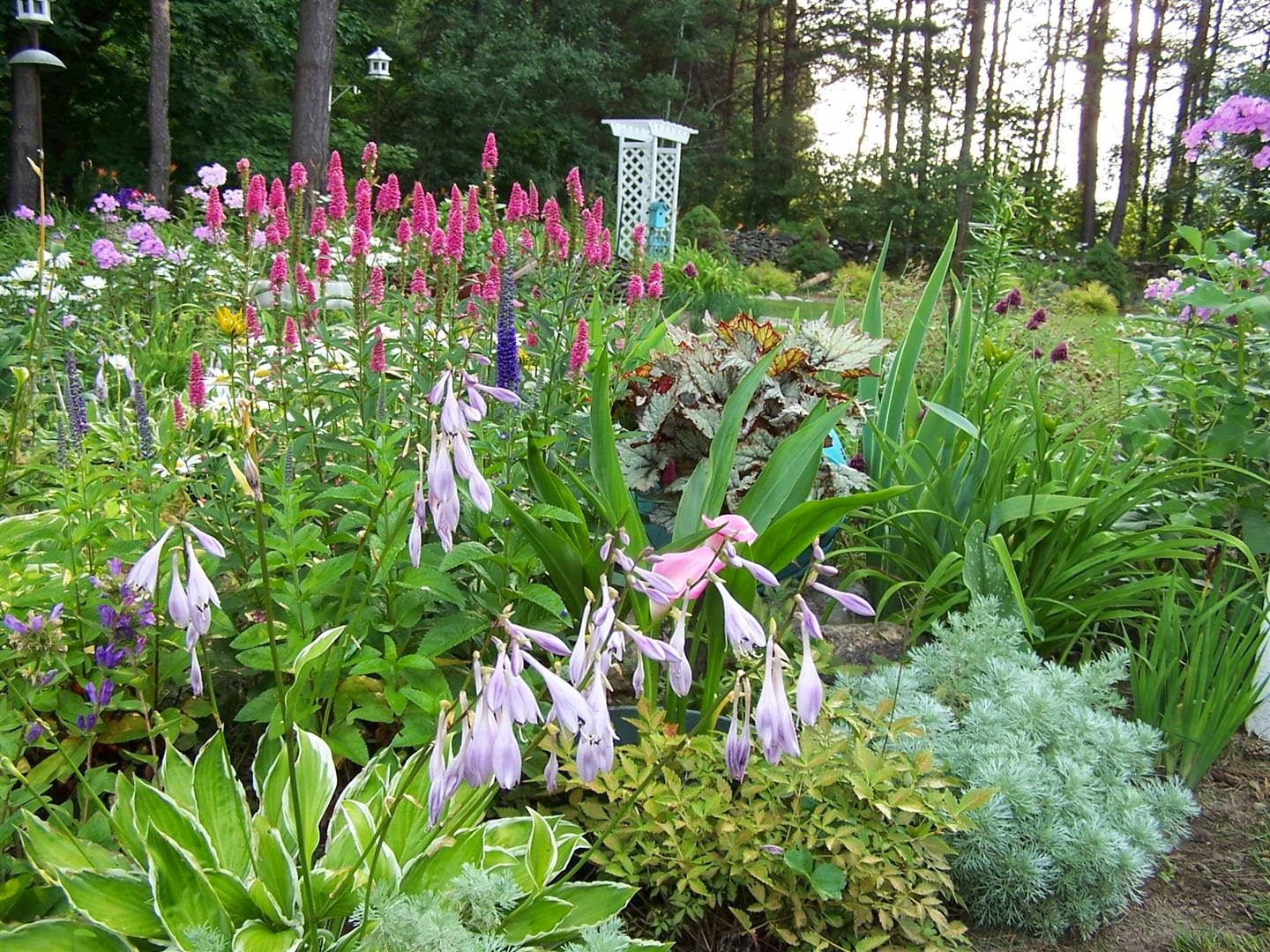 Time to go outside to finish my weekend garden chores--mostly just weeding.