It became one of the bingo prizes. 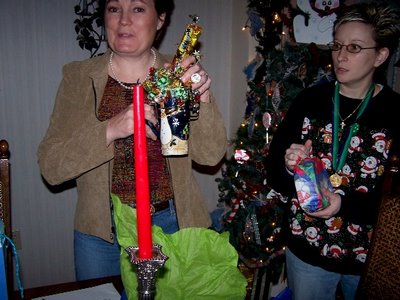 Tammy has barely opened her prize and already she is checking her card to see if the word she just heard could be marked off. 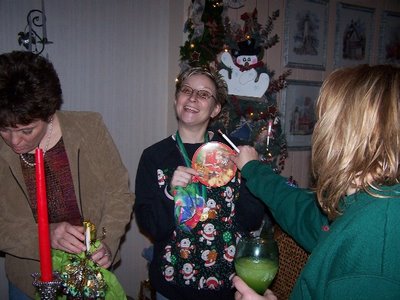 Brenda has a big smile after her win.

See that green ribbon around her neck? Well, a few years back she, my sister Delynn, and I went to Las Vegas. It was Brenda's first time in Vegas and within an hour she won a $500 jackpot and they gave her that ribbon. I tried the whole week to win a jackpot worthy of a ribbon, but I never won one. Even though I ended up winning more than Brenda, I just could never get the coveted ribbon. It has been a big joke between the two of us ever since. Almost every Christmas Brenda shows up with her ribbon around her neck. Last year the three of us went to a casino for the weekend of my birthday and darned if Brenda didn't show up with that ribbon! She has such a good sense of humor.

Email ThisBlogThis!Share to TwitterShare to FacebookShare to Pinterest
Labels: Christmas