Tooth is much better and 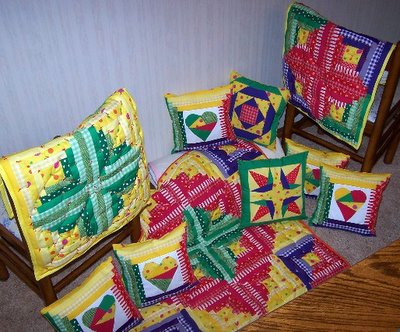 I have completed everything for the deck. I decided to make pillow forms and stuff the pillows now rather than store them flat. Better to get it all done at one time.


This project was not really as fast I had originally planned. These items have taken up almost all of my spare time for almost two weeks.

You know how we get enthused with a new project and the project keeps growing? That's what happened with this one. Originally I only planned to make a few heart blocks and turn them into a throw for the glider.
They didn't work as a throw because half of the hearts would be upside down. So I decided to turn the hearts into pillows....then I needed something else for the throw...then I remembered the two other chairs....they needed a throw, too...and a pillow.........it just grew and grew! 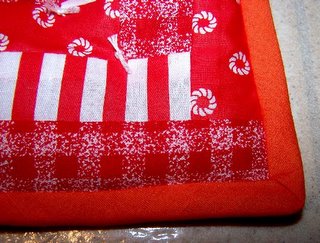 I made all of this stuff and only spent $3.00 for fiberfill for the pillows. When I went to buy it, it was 50% off--talk about lucky.

Everything else I had in my stash. The binding and thread for tying must be over a decade old.

I did not actually reduce my fabric stash, though. When I went to buy the fiberfill, they had GREAT sales and I ended up bringing home over 16 yards of 5 different fabrics. Now I have to come up with a new project to use some of it.
Posted by Diana LaMarre at 2/04/2006 03:33:00 AM