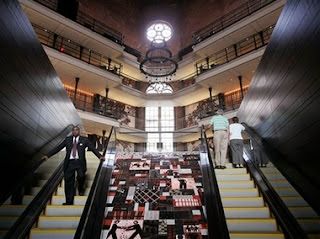 Of course, if you are on a strict budget, $319 will get you the no frills room.


Being in the hospitality industry, I found this prison converted to a luxury hotel news item to be pretty interesting.

It's called The Liberty and it used to be the Charles Street jail in Boston. Charles Street Jail into a five star luxury hotel. (AP Photo/Stephan Savoia)


This excerpt was taken from an aritcle By DENISE LAVOIE, Associated Press Writer :

Architects took pains to preserve many features of the 156-year-old stone building and its history.
The old sally port, where guards once brought prisoners from paddy wagons to their cells, is being converted into the entrance to a new restaurant, Scampo, which is Italian for "escape."
In another restaurant, named Clink, diners can look through original bars from cell doors and windows as they order smoked lobster bisque or citrus poached prawns from waiters and waitresses wearing shirts with prison numbers. The hotel bar, Alibi, is built in the jail's former drunk tank.