Yes, Zoey, there IS a Santa Claus!

I have never lacked in Christmas spirit.

My family delights in telling a story of how one Christmas Eve at 8:00 p.m. I heard on TV that Santa was spotted over Michigan and I quickly dashed off to bed...not so unusual..........unless you're 16 years old! (My family loves to embellish stories of my youth).

When I was five years old, my brother and I spotted Santa 's sleigh on top of our garage roof. I still remember Jeff and I looking out the window and seeing the sleigh and reindeer. We were on our way downstairs after my parents woke us up on Christmas Eve because Santa was there to personally give us our gifts. I remember that I got a doctor kit and a big tall bride doll. It's the first Christmas I remember.

Well, this Christmas Eve I really truly saw Santa. Not only did I see him, but just hours ago, I was whisked off to his mystical magical home at the North Pole. (With the help of my niece's brand new GPS navigation system...she keyed in "North Pole" and we were there in just minutes)

See, here is where Santa lives. Just click to see it better.

It's a beautiful place. There is even an igloo with penguins. 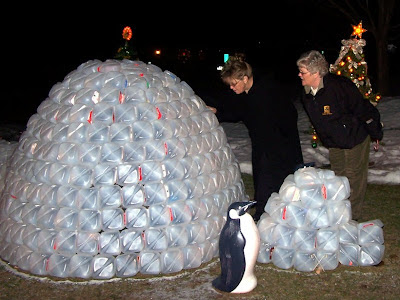 My sister & I are checking out the igloo. Santa and his elves made it entirely out of old milk jugs. Mrs. Santa said it took over 500 milk jugs. (They must have very healthy teeth and bones in Santa's family.)

I told Santa what a good girl I had been all year. He gave me a candy cane. Then he said my sister and I could get in his sleigh!! The reindeer stood silently while we climbed up. 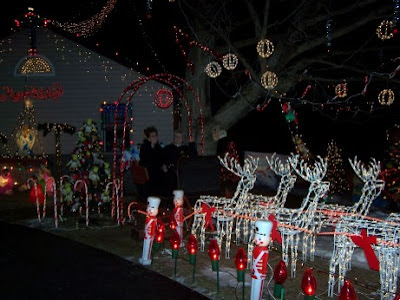 How exciting it was to be in Santa's sleigh just before he took off for his Christmas Eve ride! 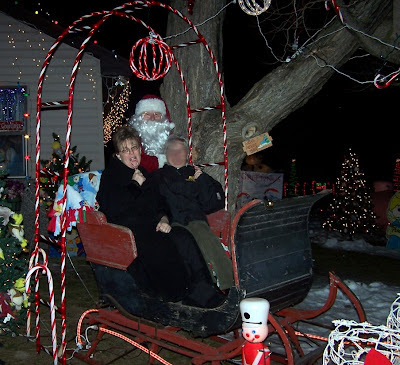 I was hoping he needed some helpers for the big night, but he said he was fully prepared. He let my nieces jump in for just a moment and then he said he had to start packing up. 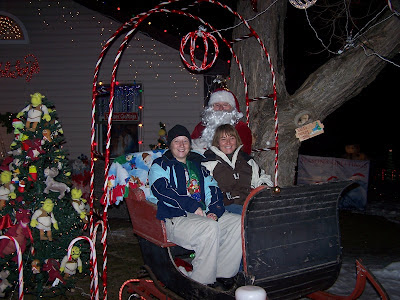 While Mr. Claus was preparing his sleigh, Mrs. Claus took us all on a tour inside her home. Yes, we got to go INSIDE Santa's home. It was thrilling! Here is their living room. 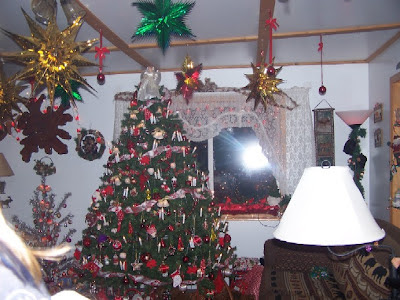 There is not an inch of the home that is not decorated.

What a wonderful Christmas Eve we all had!

I just heard a noise on the roof. I'd better get to bed!