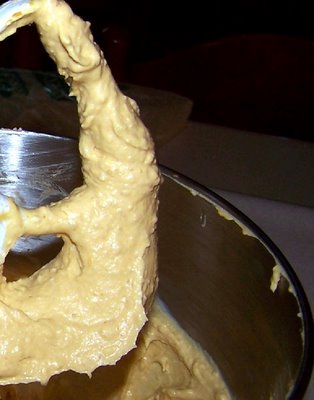 I made another Libby's pumpkin roll yesterday. I had about a 1/2 cup of leftover pumpkin and decided to toss it into the filling with just a pinch of orange zest.


I ended up with a nice orange color in the center and more pumpkin flavor which I liked quite well. 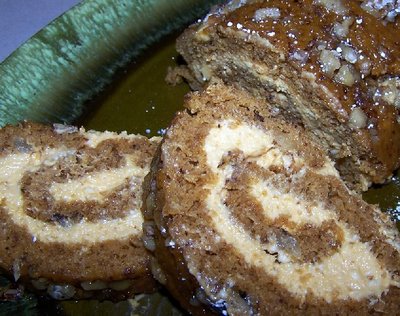 I also found my Starbuck's pumpkin bread recipe and made two more of those....sort of....I changed the recipe and ended up with this 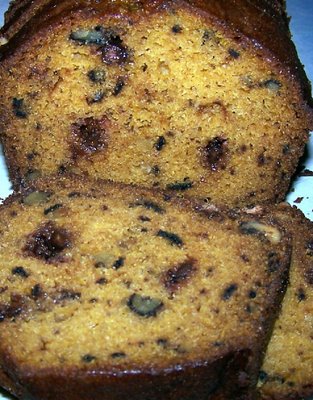 Pumpkin bread chocked full of walnuts and milk chocolate chips. I am eating a piece right now with a cup of coffee. It is delish!

I think I've changed the recipe enough that I can now post it without getting into trouble. I also added all the spices as the original had none. So for all of you googling for the pumpkin bread recipe, here is my spiced up version:

Combine all the dry ingredients in a medium bowl.

Beat the sugars, eggs, and vanilla until well combined. Add the pumpkin and oil and beat for about 6o seconds.

Gradually add the dry ingredients into the wet, using the stir feature of the electric mixer. Mix until just combined. Do not over mix. Toss in the chocolate chips and walnuts.

Pour into a well greased 8 1/2 x 4 1/2-inch loaf pan and bake for about 1 hour and 10 minutes at 350 degrees F. Start checking at one hour by sticking a skewer into the center. The loaf is done when it comes out dry. I had to cook mine for 70 minutes.

I doubled the recipe and made two loaves because it's just as easy to do two and freeze them as it is one.